Grow Text SizeShrink Text Size
Anthony Colaprete
The mission objectives of the Lunar Crater Observation and Sensing Satellite (LCROSS) are to advance the Vision for Space Exploration by confirming the presence or absence of water ice in a permanently shadowed crater at either the moon's North or South Pole. The identification of water is very important to the future of human activities on the moon. LCROSS will blast the permanently dark floor of one of the moon's polar craters with two heavy impactors early in 2009 to test the theory that ancient ice lies buried there. The impact will cause an explosion of material from the crater's surface to create a plume that specialized instruments will be able to analyze for the presence of water (ice and vapor), hydrocarbons and hydrated materials.

LCROSS will also provide technologies and modular, reconfigurable subsystems that can be used to support future mission architectures.

NASA Ames Research Center, Moffett Field, Calif., will oversee the development of the LCROSS mission with its spacecraft and integration partner Northrop-Grumman. This is a fast-paced, low-cost, mission that will leverage some existing NASA systems, Northrop-Grumman spacecraft expertise, and Ames' Lunar Prospector spacecraft experience. Ames will manage the mission, perform mission operations, and develop the payload instruments, while Northrop Grumman will design and build the spacecraft for this innovative mission.

Scheduled for launch in 2008, LCROSS will travel to the moon as a co-manifested payload aboard the launch vehicle for the Lunar Reconnaissance Orbiter (LRO). LRO is designed to map the lunar surface and characterize landing sites for future missions. 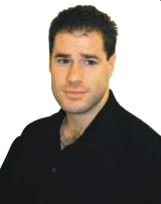 Anthony Colaprete (photo to the left) is the LCROSS principal investigator.

Colaprete has worked on a variety of space projects ranging from sounding rocket and space shuttle flights, to micro and small satellites:

In most cases these projects had limited budgets and aggressive schedules, forcing the project to be innovative, often taking advantage of equipment and efficient labor phasing to stay on schedule and budget.

In addition to his project and instrumentation work, Colaprete is internationally recognized for his work on the nature of the martian climate system. He has developed state-of-the-art cloud microphysical schemes and incorporated them into the NASA/Ames Mars General Circulation Model. He has used these models to show carbon dioxide ice clouds on early Mars do warm the surface through a scattering greenhouse, but not to the levels previously thought, impact events on early Mars can dramatically alter the planet's climate system and could provide an explanation for many of the fluvial features and atmospheric dynamics can explain the observed offset of the south polar residual ice cap. These findings have had a significant impact on the field, and have motivated follow-up studies by other groups of researchers. In addition to his scientific research, Colaprete has also contributed to various projects at Ames including the Pascal Scout Mission for which he is the deputy principal investigator, the Mars Polar Drill Scout mission for which he is leading the effort on the meteorology package, and the Lunar Robotic program for which he is the science / payload lead on one of the Ames proposals. Colaprete has also formed an instrument working group at NASA Ames whose purpose is to facilitate new business and maximize the use of Ames facilities.

For information about LCROSS on the Web, visit: