Airborne Pollutants Know No Borders
Mounting evidence suggests that gas and aerosol pollutants are routinely transported by winds across and between continents and can affect the air and climate of areas far from their source.

Scientists studying atmospheric changes have observed smoke plumes from wildfires in the boreal forests of Alaska and Canada that were carried as far as parts of Europe, Africa and the Arctic. Satellite imagery was used to guide field research that used weather instruments aboard five different aircraft and the ship Ronald H. Brown to sample the air above North America and the Atlantic Ocean. 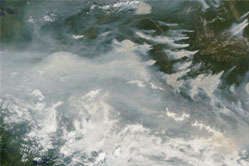 "Our findings are the most extensive characterization of the North American troposphere to date," said Hanwant Singh, project scientist at NASA Ames Research Center, in California's Silicon Valley. “We investigated the transport and transformation of gases and aerosols on intercontinental scales. Pollution plumes from Asia and North America were intercepted and analyzed as they were transported over the North American continent and the Atlantic.” Singh led the Intercontinental Chemical Transport Experiment – North America (INTEX-A) campaign that studied the chemical composition and processes of atmospheric changes over North America.

Top: In July, 2004, researchers observed smoke plumes from forest fires raging in Alaska and Canada . Satellite images showed trails of smoke as far away as Europe, Africa, and the Arctic.

Changes in atmospheric composition and climate have been attributed to rapid industrialization and the related energy consumption. Fossil fuels are the main source of energy. Studies have shown that air pollutants from carbon-based fuels include such contaminants as carbon monoxide, nitrogen oxides and other harmful gases and particles.

Any substance introduced into the atmosphere has the potential to circle the Earth. In the last decade, field experiments have documented the flow of air pollutants from the Asian continent to the Pacific Ocean.

Typically, the transport of Asian pollution to North America peaks in spring. However, five major Asian plumes were observed at lower atmospheric levels crossing North America in the summer. When plumes were sampled and analyzed, findings showed fewer human-produced pollutants (such as carbon dioxide) and more biogenic trace gases, which occur naturally from microbial activity in soil (such as nitrous oxide and nitric oxide) and wetlands, swamps and rice paddies (such as methane.)

“We found that air quality across the North American continent was greatly polluted by major fires over Alaska and Canada and strong winds from Asia,” explained Singh.

While scientists witnessed air pollutants flow into North America from Asia, they also observed air pollution flow from North America. Summertime was selected to do field research because of greater sunlight, plant emissions, and the possibility wildfires all contributing to increased smog. To sample air coming across the Atlantic, four aircraft, each carrying different weather instruments, were strategically based in New Hampshire (USA), Faial (Azores) and Creil (France).

Smoke plumes from these wildfires were detected by several satellites and affected areas thousands of miles away. Smoke reached Europe without significant removal of particles. Receptor sites along the pathway showed an increase in ozone and decrease in carbon monoxide in the upper troposphere over the Atlantic. Data also showed relatively little direct Asian influence on ozone over the United States, but a sizable U.S. influence on Europe’s ozone.

Ozone can be both beneficial and harmful to life on Earth. In the stratosphere, it prevents most of the harmful ultraviolet rays from reaching the Earth’s surface. But in the troposphere, near the Earth’s surface, the ozone is a pollutant. Surface ozone forms when nitrogen oxides and volatile organic compounds react in the presence of sunlight.

These and related studies appeared in the American Geophysical Union issues of the Journal of the Geophysical Research, 2006.