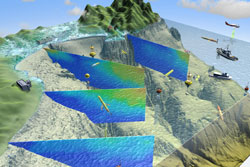 The problems scientists must solve to enable robots to explore Mars and examine Earth's oceans are very similar, according to NASA computer scientists.

The Autonomous Ocean Sampling Network (AOSN) Monterey 2003 Field Experiment involves several ships and dozens of floating, diving, and flying oceanographic instruments operating simultaneously. Their goal is to observe and model water movement, temperature, and other upwelling-related processes in Monterey Bay over a 4-week period during August, 2003. In this computer-generated image of the Monterey Bay study area, the color of the ocean surface indicates water temperature--cold upwelling water is shown in blue; warmer water is yellow and red. Photo credit: David Fierstein (c) 2003 MBARI

One major difficulty for large, collaborative groups of scientists scattered around the globe is for them to cooperatively and efficiently operate instruments and robots investigating distant planets and moons.

To meet these challenges, NASA experts have developed computer 'tools' to keep these scientists on the 'same page' using the power of electronic 'whiteboards,' computers and the Internet's linking ability to connect people, machines and spacecraft. These same techniques are proving to be invaluable for exploration under our very own oceans.

Two NASA systems that increase speed and efficiency for scientists are XBoard and ScienceOrganizer. To demonstrate how useful they could be, NASA Ames Research Center, located in California's Silicon Valley, is providing them to scientists during a major experiment underway in the Pacific Ocean off the central coast of California - the largest oceanographic field study ever conducted in the United States.

From July through mid September 2006, oceanographic researchers from more than a dozen institutions are carrying out four major experiments in a mammoth, multi-pronged effort in Monterey Bay, home of a deep underwater canyon. The overall experiment, called Monterey Bay 2006, or 'MB 06,' includes 13 vessels, fixed and drifting instruments and several dozen robotic vehicles.

"It's a demonstration project," said Kanna Rajan, principal researcher for autonomy at the Monterey Bay Aquarium Research Institute (MBARI), Moss Landing, Calif. MBARI is the institution that organized the MB 06 effort. "MBARI is a key player because all the data come through the MBARI data portal. It (gathers) in data from underwater assets, ships and underwater robots – everything," Rajan explained.

"This particular engagement with MBARI has to do with enabling scientists to track their reasoning processes as they conduct their field experiments," said Richard Keller, a computer scientist in charge of ScienceOrganizer software development at NASA Ames. "They are forming research questions and trying to design experiments to prove or disprove their theories," he added.

"In terms of using ScienceOrganizer to track the scientific reasoning and planning processes, this is a new way of using our tool," Keller observed. "We haven't had anybody use the system for this purpose during an actual scientific mission, but we did develop a prototype for the Mars Exploration Rovers mission. This (the group of Monterey Bay experiments) is an opportunity for us to test some of these ideas in the field in practice," Keller said.

The two computer systems being demonstrated during MB 06 - XBoard and ScienceOrganizer - are in the forefront of NASA's efforts to proficiently plan and conduct science. They and predecessor NASA systems are intended to help scientists avoid excessive paper handling, to improve organization, to increase speed and to help simplify their jobs. These programs could be used throughout the scientific process from brainstorming, to planning operations, and finally to receiving data from on-site instruments on Earth and Mars.

For MB 06, ScienceOrganizer stores scientific proposals, short text summaries, data, plots, graphs and written analyses. All these are interlinked in multiple ways to make it easier for scientists to find and access information they want. ScienceOrganizer is very flexible because it can be customized to meet the needs of different groups of users. In 2003 and 2004, NASA used ScienceOrganizer to help during the investigation of the space shuttle Columbia accident.

"Each use of ScienceOrganizer requires a catalog of the different kinds of information and links that are to be stored," Keller explained. "For the Columbia accident investigation . . . we had a whole different set of data and links than we used for MB 06," Keller noted. Dan Berrios, a computer scientist at NASA Ames, collaborated with MBARI personnel to tailor ScienceOrganizer for use during MB 06.

During the Monterey Bay experiments, about 20 scientists have been invited to share their information, now stored in ScienceOrganizer.

"ScienceOrganizer stores a record of scientists' discussions of how to best prove or disprove their theories," said Keller. "It is functioning as a tool for capturing scientific decision-making. It creates a record of how scientists came to their decisions about how to conduct their experiments. This gives scientists who are not present for discussion an opportunity to review the scientific debate and discussions after the fact, " according to Keller.

"It serves as a capture mechanism, like a videotape, but it's organized so when the same thing comes up again and again in the discussion, we consolidate all of this information in one place, and cross-link that information to other relevant topics. We're slicing and dicing their conversations and trying to represent it in a cleaner organization," he continued.

"We're also augmenting their discussion by linking additional information that is relevant to the discussion. For example, if someone mentions instrument readings from one of the oceanographic sensors, then we link that discussion to the data. It is a hyperlink like one used on the Internet," Keller observed.

"ScienceOrganizer has structured problem solving," Rajan said. "To date, all the folks who have seen the system have given it high marks for its use in the ocean science domain.

"(Scientists are) trying to sample the ocean with an array of assets," Rajan said. "When they sample it, (we are asking) what kind of data do we get, and how can these data be . . . (incorporated) in synthetic models of the ocean?" A synthetic model is a simulation of what the ocean is doing within a specific area.

The second system, XBoard, includes a central server computer to store hand-written ideas, pictures, diagrams and data. Electronic 'whiteboards' - about the size of small chalkboards - can display these items simultaneously at various sites across the world where teams of scientists work.

Scientists at each location can brainstorm, print lists of ideas and sketch on the whiteboards, which are large enough for each group of scientists to study without squinting. These electronic whiteboards - XBoards - are also touch screens that scientists can touch with their fingers to control each whiteboard's computer programs, just as scientists could control them with computer mice.

"In the XBoard, one of my students has built what's called a situational awareness tool," Rajan noted. "That tells you where each asset is located in the ocean based on a global positioning system (GPS) location, and it (the awareness tool) also connects each of the assets to the data stream so you can look at the data and assess what the ship or the robot is doing," Rajan said.

According to Rajan, using XBoard, the MB06 scientists are able to get together every other day. "They are manipulating images and other data because what they are trying to do is understand how the ocean works. This whole decision-making process is very similar to the Mars Exploration Rover decision process. Essentially (they are asking) 'what do we do next?'"

With both XBoard and ScienceOrganizer, NASA has computerized 'brainstorming,' planning and data collection so scientists could achieve incredibly complex Mars and other missions more quickly. The MBARI trial of the two NASA computer systems is helping scientists to test and further develop these systems for future missions.

For more information about the MBARI undersea experiments, please visit: