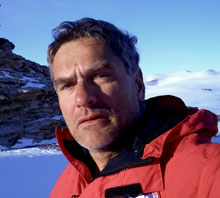 Christopher McKay, a scientist at NASA Ames Research Center in California's Silicon Valley is second author of a technical paper that appears in the July 27, 2006, issue of the journal, Nature. The paper, "Methane drizzle on Titan," reports that liquid methane rains on the surface of Titan, a moon of Saturn.

Data the European Space Agency's Huygens probe collected in January 2005 indicates there is a lower, barely visible, liquid methane-nitrogen cloud that drops rain to the surface of Titan, a team of scientists from universities, an observatory and NASA reported.

Temperatures on Titan are so cold -- minus 300 degrees Fahrenheit (minus 149 degrees Celsius) -- that the methane can form liquid. Titan's landscape includes fluvial, river-like features that may well be formed by methane rain, scientists noted. The principal author of the paper is Tetsuya Tokano from the University of Cologne, Germany.

or read the news release: http://www.nasa.gov/centers/ames/news/releases/2006/06_57AR.html