NASA's 1976 Viking Landers Could Have Missed Organics on Mars 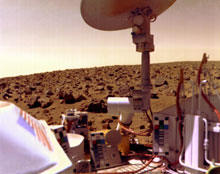 NASA's first major effort to look for life on Mars was carried out by two Viking spacecraft that landed, probed and tested the planet's soil for signs of martian life in 1976. The tests were inconclusive, because what first appeared to be chemical signs of life could have been caused by non-life chemistry. The spacecraft included a sensitive test for organic material. The apparent absence of organic material has led many to favor the non-life explanation for the red planet.

Recently, scientists conducted tests on desert and other nearly sterile soils on Earth, similar to those that two Viking spacecraft conducted on Mars in 1976. The researchers found that the Vikings' organic detection instruments were not sensitive enough to perceive minute bits of organics existing in those barren wastelands on our world. A technical report describing the scientists' tests appeared in an issue of the Proceedings of the National Academy of Sciences in late October 2006.

"Our study shows the Viking instruments from the 1970s may have been unable to detect low levels of organics on Mars, due to the presence of iron in the soils, because the soil was heated in the presence of this iron. Future Mars missions should use methods that do not involve heating the soil, such as liquid extraction," said Christopher McKay, a scientist at NASA Ames Research Center in California's Silicon Valley, and one of the report's authors. The principal author is Rafael Navarro-Gonzalez from the Universidad Nacional Autonoma de Mexico.

The scientists also studied soils from other places on Earth that have high iron content, as does much of Mars. For example, soils containing iron oxides, or their salts, in Spain's Rio Tinto area and California's Panoche Valley, oxidize organic materials to produce carbon dioxide that blocks detection of organics.

In addition, the researchers tested a volcanic Hawaiian soil from a cinder cone south of Mauna Kea, soil that also contains organics. This soil is very similar to martian surface materials, according to scientists, and is used to simulate Mars' soil in laboratory experiments. Viking's 1970s-era instruments would not have detected organics in this Hawaiian organic soil, either, scientists said.

McKay said it is important that instruments destined for Mars first need to be tested thoroughly on Earth.

"This is a real issue for future missions. It makes no sense to send an instrument to Mars that cannot even detect organics in these environments on Earth," McKay said. "We need to test (the instruments) here first. If they can't detect life in the Atacama Desert, or the hills of Hawaii, they are not ready for Mars," he added.

"The fact that no organic molecules were released by this (1976 Viking) analytical treatment during the analysis of Mars soils does not demonstrate that there were no organic materials on the surface of Mars. . . ," concluded study scientists. "The question of whether organic compounds exist on the surface of the planet Mars was not conclusively answered by the organic analysis carried out by the Viking Landers."