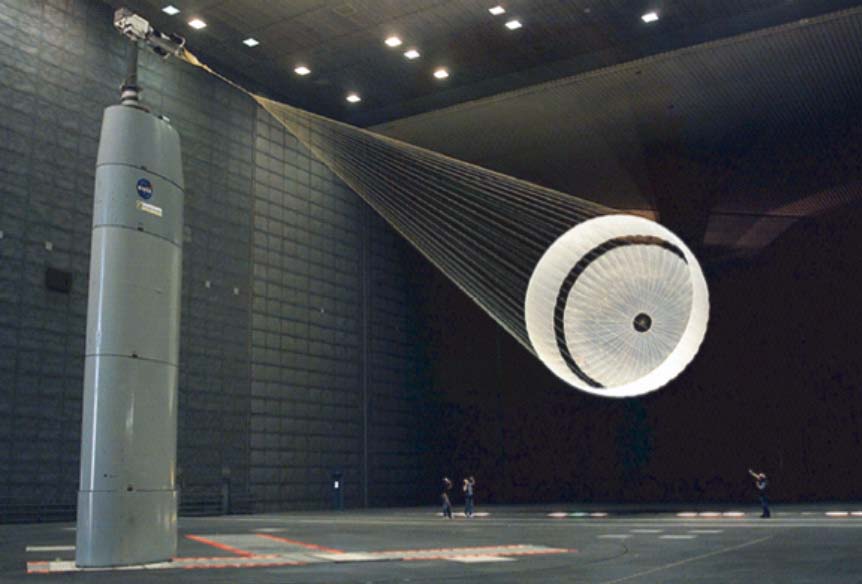 NASA Ames Research Center conducted a series of tests of the Mars Exploration Rover parachute in its 80- by 120-Foot Wind Tunnel.

Des Marais will serve as a lead of the MER working group's long-term planning group. He will help coordinate day-to-day rover operations with the mission's overall objectives and long-term strategies. Day-to-day team operations will entail coding science team requirements into command sequences that the rovers will execute. Des Marais also will help coordinate activities between the two rovers and the Mars orbiters. As an astrobiologist, he will investigate how liquid water might have influenced rocks and soils at the sites.

Cabrol will serve in the Mars Exploration Rover geology group and as a documentarian for the long-term planning group. She will interpret data from the rover's panoramic camera and Microscopic Imager, an instrument that will take high-resolution close-ups of martian rocks and soils in order to understand the origin of the sediments deposited at the landing sites.

Sims will provide robotics and intelligent software expertise for the mission. He will study the elements of the current visualization software that could be used in future Mars missions. Sims also will work on enhancement and modeling for the Microscopic Imager instrument aboard each rover. In addition, he will serve as one of the spacecraft downlink coordinators, managing data transfer between the MER mission operations team and the science team.

NASA Ames developed a set of collaborative software tools known as 'Marsoweb' that is used by planetary scientists to review available Mars data and determine the best and safest sites for the Mars Exploration Rover landings. Marsoweb, which may be accessed at: http://marsoweb.nas.nasa.gov/, serves as a clearinghouse for all data relevant to the Mars landing site selection process for the mission, and has archived studies of more than100 landing sites. Marsoweb features an archive of more than 500 high-resolution Mars Orbiter Camera (MOC) images of the candidate landing sites, as high as 1.5 meters per pixel.

Marsoweb became a de facto official website of the landing site selection process as Mars Exploration Rover landing site scientists analyzed, visualized and compared data from past Mars missions, including Mars Global Surveyor and Mars Odyssey data. Over 120,000 users from government, academia and the public have accessed the site to date. Marsoweb is the result of a four-year effort by the Center for Mars Exploration (CMEX) at NASA Ames, the NASA Advanced Supercomputing (NAS) Division's Data Analysis Group at Ames and the Mars Exploration program. Web site development has been overseen by principal investigator Dr. Virginia Gulick and implemented by web developer Glenn Deardorff.

A series of tests conducted in NASA Ames' 80- by-120 Foot Wind Tunnel, which took place from September 2002 through January 2003, aided the selection of the optimum parachute design for the Mars Exploration Rover mission. Parachutes play an important role in the MER mission. When each 400-pound rover, encased in a lander, enters Mars' atmosphere, a parachute 28 feet in diameter will slow its descent.

During the tests, which simulated entry into the thin martian atmosphere, engineers tested a dozen different parachutes, firing them from mortars in the test section, with the wind tunnel running at speeds of up to 100 miles per hour. The Mars mission structural requirement for the parachute was that it be able to sustain an opening drag load of at least 24,200 pounds, 25 percent greater than the expected load on Mars. The testing involved NASA JPL, NASA Ames and NASA Langley Research Center teams.

The parachute tests at Ames were conducted in three phases. Phase one demonstrated that NASA could get the data it needed using a wind tunnel. Phase two tested different parachute candidates provided by Pioneer Aerospace Corp., enabling engineers to choose the best design. Phase three tested the chosen parachute to ensure that it met structural standards for the Mars mission.

NASA Ames Research Center supported the design, manufacture and test of the thermal protection system (TPS) used on the Mars Exploration Rover aeroshell structure. The TPS protects the aeroshell, which contains components like the parachute, payload and rover, from the extreme heating caused by deceleration into Mars' atmosphere during the entry phase of the mission. NASA Ames' Arc Jet complex was used in qualifying all of the MER aeroshell TPS materials in a simulated high-temperature entry environment.

Ames-manufactured TPS material, known as SIRCA (Silicone Impregnated Reusable Ceramic Ablator), was attached to the back part of the aeroshell, called the backshell interface plate. SIRCA also was used to protect the three Transverse Impulse Rocket System (TIRS) located on the sides of the aeroshell. The SIRCA TPS material originally was developed at Ames and flight-tested during the successful July 4, 1997 Mars Pathfinder landing.

Ames' Computational Sciences Division developed a suite of mission support software for the ground control and operations of the two surface rovers, Spirit and Opportunity. During the Mars Exploration Rover mission, 240 engineers and scientists will collaborate to oversee the actions of the two rovers, which will be working in two different Mars time zones. 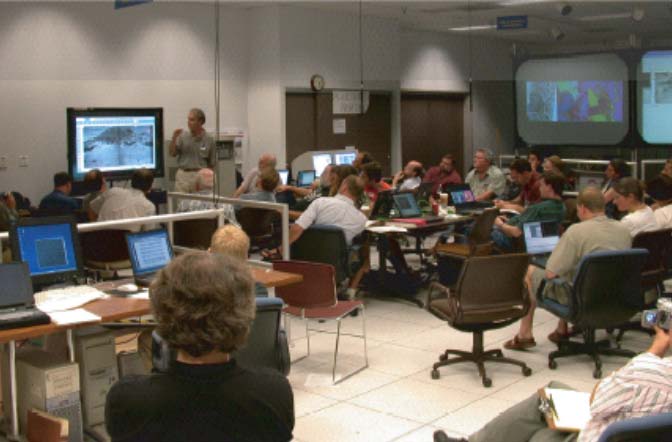 To assist Mars Exploration Rover scientists and engineers in complex collaborative operations tasks, Ames developed the MERBoard, a computing platform that provides an immersive and interactive computing environment. The MERBoard provides a large touchscreen workspace for team members to view, analyze and share data from Mars. This computing tool provides a data storage and retrieval space that makes data accessible to scientists and engineers throughout the mission operations area. Team members can view and control one MER-Board from another, allowing for quick collaboration between teams.

The MERBoard is the primary computer tool used by the rovers' long-term strategic planners to create flow charts for each rover's traverses across Mars.

To keep the ground operations crew up to speed and coordinated during each rover's tightly scheduled actions in two different Mars time zones, Ames developed the MER Collaborative Information Portal (CIP). This collaborative data distribution and situational awareness tool is used for information display and data access of vital information to scientists and engineers working the mission in real time.

Using CIP, at any time, on any computer, using a custom-built interface designed specifically for the Mars mission, team members can immediately access reports, images, daily schedules or mission plans stored in a variety of databases.

NASA Ames also developed the Mixed Initiative Activity Planning Generator (MAPGEN), a ground-based science planning support system for Mars Exploration Rover operations. This is a critical tool that helps the round-the-clock science teams at JPL plan science goals and program computer command sequences for the rovers' day-to-day operations. This system was co-developed with JPL to enable the mission's complex science requirements to be achieved while best utilizing the rovers' power and time. This tool helps to increase the amount of science data returned from the rovers.

To inspect the science data, Mars scientists will use the Ames-developed 'Viz' software tool. This software uses images from stereo cameras on-board the rovers to construct a realistic, three-dimensional model of the martian environment. Since a 20-minute communications delay between Earth and Mars rules out real-time viewing of the rovers' immediate surroundings, Viz provides a virtual reality simulation, letting rover operators explore its immediate environment and plan upcoming traverses. With Viz, they can 'travel' over the Mars surface, measure distances and select the best sampling sites and routes, using virtual reality.

Ames also collaborated on the design of human interfaces for MER software tools.

Researchers have never studied the long-term effects on human performance of a Mars work schedule, which shifts 39 minutes later each day. The fatigue countermeasures group is designing fatigue countermeasures, such as well-timed naps or drinking coffee, and documenting the team's sleep/wake cycles. A non-intrusive Actiwatch device will collect activity data and sleep cycle data. Results will be used to develop mission work schedules that help to minimize fatigue and maximize performance and alertness in future Mars operations.

Other software technologies developed by NASA Ames information sciences include C Global Surveyor, which verifies and validates outcomes for large software systems related to the mission and Brahms, which models and simulates mission operations.