The Human Systems Integration Division of the Exploration Technology Directorate focuses on human-centered design and operations of complex aerospace systems. In particular, division engineers and scientists conduct experimentation, analysis and modeling of human performance and human-automation interaction. The goal is to make improvements in safety, efficiency, and mission success. 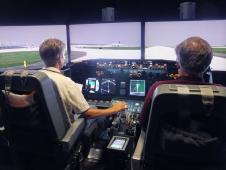 The division contains over 100 personnel and over a dozen labs dedicated to aeronautics and space-related activities. The aeronautics facilities within the division include simulators for aircraft flight decks and air traffic control stations associated with the Next Generation Air Transportation System (NextGen). In addition, the aerospace facilities include labs for investigating human performance metrics such as eye movements, reaction time, and physiological parameters. As a means of evaluating and developing technologies, the division also maintains facilities associated with virtual environments and human-computer interaction (HCI). Recent HCI applications include a planning and scheduling system (called Score) for the Mars Science Lander as well as Mission Assurance Systems for assessing potential problems in spaceflight. The capabilities enabled through these facilities provide a new understanding of how individuals and teams assimilate and act on information in pursuit of NASA mission success.