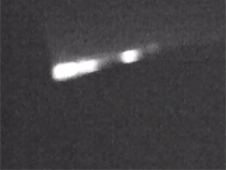 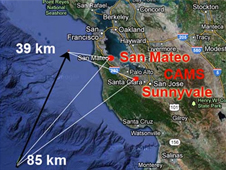 MOFFETT FIELD, Calif. – NASA and the SETI Institute are asking the public to check their video security camera footage around 7:44 p.m. PDT Wednesday night, in the hope it recorded the meteor that illuminated the sky over the Bay Area and created sonic booms. That video may help researchers study how the meteor broke during descent.

The fireball was filmed by two stations of NASA's Cameras for All-sky Meteor Surveillance (CAMS) project, located in Sunnyvale and at the San Mateo College Observatory. The calculated trajectory shows that meteorites may have fallen just north of San Pablo Bay, along a band stretching east of San Rafael towards Sonoma and Napa, a mostly agricultural area.

"This was a slow moving fireball, which greatly increases the chances that a significant fraction of it and somewhat larger pieces survived," said meteor astronomer Peter Jenniskens, of the SETI Institute. A map of the fireball’s trajectory and the general area where the search would commence can be found at the CAMS website. To report video and photographic records, please visit:


http://cams.seti.org
Media interested in interviewing Jenniskens are asked to contact Karen Randall of the SETI Institute at 650-960-4537. For more information about NASA Ames, visit:


http://www.nasa.gov/ames
For more information about the SETI Institute, visit: