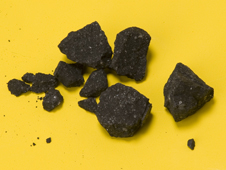 Images from the search 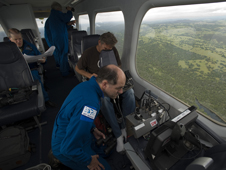 Click image for full resolution.
Dr. Peter Jenniskens take a closer look at the image from the AVS Cineflex HiDEF camera mounted on the nose of the Eureka Airship. Mike Coop, can be seen in the background checking the map, further back other flight members continue to look for potential impact sites.
Image credit: NASA / Eric James 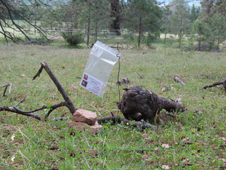 Click image for full resolution.
Merv de Haas horse pasture, near Lotus, California, which is the site of where the Sutter’s Mill meteorite fragment was found on May 3, 2012. The site was searched during ground search using aerial sightings.
Image credit: NASA / Ed Schilling

Click here for a story about the search. MOFFETT FIELD, Calif. - Scientists found treasure when they studied a meteorite that was recovered April 22, 2012 at Sutter's Mill, the gold discovery site that led to the 1849 California Gold Rush. Detection of the falling meteorites by Doppler weather radar allowed for rapid recovery so that scientists could study for the first time a primitive meteorite with little exposure to the elements, providing the most pristine look yet at the surface of primitive asteroids.

An international team of 70 researchers reported in today's issue of “Science” that this meteorite was classified as a Carbonaceous-Mighei or CM-type carbonaceous chondrite and that they were able to identify for the first time the source region of these meteorites.

"The small three meter-sized asteroid that impacted over California’s Sierra Nevada came in at twice the speed of typical meteorite falls," said lead author and meteor astronomer Peter Jenniskens of the SETI Institute, Mountain View, Calif., and NASA Ames Research Center, Moffett Field, Calif. "Clocked at 64,000 miles per hour, it was the biggest impact over land since the impact of the four meter-sized asteroid 2008 TC3, four years ago over Sudan."

"It circled the sun three times during a single orbit of Jupiter, in resonance with that planet," Jenniskens said. Based on the unusually short time that the asteroid was exposed to cosmic rays, there was not much time to go slower or faster around the sun. That puts the original source asteroid very close to this resonance, in a low inclined orbit.

"A good candidate source region for CM chondrites now is the Eulalia asteroid family, recently proposed as a source of primitive C-class asteroids in orbits that pass Earth," adds Jenniskens.

After the asteroid broke up in the atmosphere, weather radar briefly detected a hailstorm of falling meteorites over the townships of Coloma and Lotus in California. This enabled a rapid recovery that permitted the most pristine look yet at a CM-type carbonaceous chondrite.

"This was the first time a rare carbonaceous chondrite meteorite was recovered based on such weather radar detection," said Marc Fries of the Planetary Science Institute in Tucson, Arizona, who pioneered the use of this technique. "Meteorites were found mostly under the radar footprint."

Of the estimated 100,000-pound asteroid, less than two pounds was recovered on the ground in the form of 77 meteorites. The biggest was 205 grams. Some of the key meteorites discussed in this work were found by volunteer search teams led by Jenniskens.

"The entire Ames community really came together in the search for these meteorites. People work at NASA because they love science and that was very evident when we saw the overwhelming response of volunteers from Ames wanting to be a part of this,” said Pete Worden, director of NASA Ames Research Center.

"The meteorite was a jumbled mess of rocks, called a regolith breccia, that originated from near the surface of a primitive asteroid," said meteoriticist Derek Sears of NASA Ames.

NASA and the Japanese space agency (JAXA) have plans to target asteroids similar to the one recovered at Sutter’s Mill. The Sutter's Mill meteorite provides a rare glimpse of what these space missions may find.

"NASA's robotic OSIRIS-REx mission is currently being prepared to bring back a pristine sample of an asteroid named 1999 RQ36," said co-author and mission co-investigator Scott Sandford of NASA Ames. "In addition, Sutter's Mill has the same reflective properties as near-Earth asteroid, 1999 JU3, the mission target of the Hayabusa 2 sample return mission currently being prepared by the Japanese space agency, JAXA."

The rapid recovery resulted in the detection of compounds that quickly disappear once a meteorite lands on Earth. Mike Zolensky, a mineralogist at NASA’s Johnson Space Flight Center, Houston, was surprised to detect the mineral oldhamite, a calcium sulfide, known in the past to disappear from contact with water by simply breathing on it.

"This mineral was known before mainly from rare enstatite chondrites," said Zolensky, "and its presence in the regolith breccia could mean that primitive and highly evolved asteroids collided with each other even at early times when the debris accumulated that now makes the meteorite matrix."

A wide array of carbon-containing compounds was detected that quickly reacted with water once in the Earth's environment. It is thought that the carbon atoms in our body may have been brought to Earth by such primitive asteroids in the early stages of our planet’s history.

"Amino acids were few in this meteorite because this particular meteorite appears to have been slightly heated in space before it arrived at Earth," said Danny Glavin of NASA’s Goddard Space Flight Center, Greenbelt, Md.

It appears that different parts of the meteorite had a different thermal alteration history. Heating also removed some of the water that used to move salts around in the asteroid.

"Samples collected before it rained on the meteorite fall area still contained such salts," said George Cooper of NASA Ames, "but Sutter's Mill was less altered by water in the asteroid itself than other CM type meteorites."

"Only 150 parts per billion of Sutter's Mill was actual gold," said co-author and cosmochemist Qing-zhu Yin of U.C. Davis, Davis, Calif., "but all of it was scientific gold. With 78 other elements measured, Sutter's Mill provides one of the most complete records of elemental compositions documented for such primitive meteorites."

To view a video about the search for this meteorite, visit: