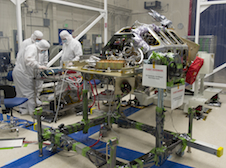 A team of engineers at NASA's Ames Research Center, Moffett Field, Calif., tests an electrical interface on the Lunar Atmosphere and Dust Environment Explorer (LADEE) spacecraft to ensure all of the cable pins are in the correct location and that it is safe to connect. Image credit: NASA/Ames – Eric James
Click image for full resolution. 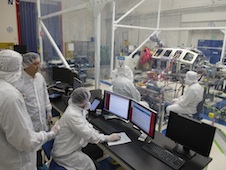 LADEE is a robotic mission that will orbit the moon to gather detailed information about the lunar atmosphere, conditions near the surface and environmental influences on lunar dust.

"The installation of the final science instrument to LADEE’s flight structure in the clean room at Ames is an important step toward completing the spacecraft build and testing," said Butler Hine, LADEE project manager at Ames. “Now that the three science instruments are fully integrated onto the spacecraft, it has become a full-fledged, high-precision space observatory.”

In addition to LADEE’s science instruments, a technology demonstration also will fly onboard. The science instruments include the Ultraviolet and Visible Light Spectrometer (UVS), which will examine the composition of the lunar atmosphere by analyzing light signatures of materials it finds; the Neutral Mass Spectrometer (NMS), set to measure variations in the lunar atmosphere over multiple lunar orbits with the moon in different space environments and the Lunar Dust Experiment (LDEX), which will collect and analyze samples of any lunar dust particles in the tenuous atmosphere. The technology demonstration payload is called the Lunar Laser Communications Demonstration, and will enable the LADEE spacecraft to use lasers instead of radio waves to achieve broadband speeds to communicate with Earth.

“We now have our full science suite, and LADEE has the tools it needs to address mysteries and questions that have lingered since Apollo,” said Rick Elphic, LADEE project scientist. "Was electrostatically lofted lunar dust responsible for the horizon glow that the astronauts observed? LDEX and UVS will settle that question once and for all. What makes the exotic, tenuous atmosphere of the moon breathe and change? NMS and UVS will tell us where the different species come from, how they move and how they are lost. A mission like LADEE has been needed since Apollo, which left us with tantalizing hints about the dust and an exotic, tenuous atmosphere."

LADEE now begins its environmental test phase and will undergo tests simulating the conditions it will face during launch and operations in space. These tests include acoustic (the loud roar of the rocket), vibration (the shaking of the rocket), shock (the jolt when stages separate), and thermal-vacuum (the hot and cold vacuum conditions of deep space).

LADEE's launch in August 2013 will mark several firsts. It will be the first payload to launch on a U.S. Air Force Minotaur V rocket integrated by Orbital Sciences Corp., and the first deep space mission to launch from NASA's Goddard Space Flight Center's Wallops Flight Facility in Virginia.

For more information about the LADEE Mission, visit: