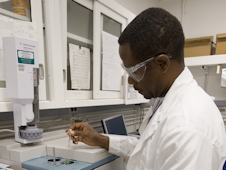 The compounds belong to newly discovered classes of compounds in meteorites, specifically keto acids, hydroxy tricarboxylic acids and tricarboxylic acids, some of which are members of the citric acid cycle. This cycle is part of a process in which living cells break down organic fuel molecules in the presence of oxygen to harvest the energy they need to grow and divide. This metabolic process occurs in most plants, animals, fungi, and many bacteria. The discovery adds to a growing body of evidence that a variety of organic compounds delivered to Earth by carbonaceous meteorites may have played a role in the origin and/or evolution of biochemical pathways. Previously, most members of the citric acid cycle had not been identified in extraterrestrial sources.

"Some apparently ancient and critical metabolic pathways require a suite of compounds, of which a few are very fragile. For such compounds to have survived this long in meteorites, they would have required either a continuous energetic production, or simply very low temperatures to preserve them," said George Cooper, research scientist at NASA Ames Research Center, Moffett Field, Calif.

The findings were published today in the Proceedings of the National Academy of Sciences.

Although many water-soluble organic compounds have been detected in carbonaceous meteorites, they never included keto acids and compounds similar to citric acid – some of which are critically important to biological processes, such as glycolysis and the citric acid cycle. These processes are considered among the earliest in the evolution of life.

"Once we identified such fragile members, like the keto acids, we started to create scenarios for how they could have formed billions of years ago, and we then tested our assumptions in the laboratory," said Cooper.

"We won’t know how significant our findings really are in terms of understanding pre-biological processes on early Earth, until we see more evidence from other disciplines, like astronomy, and geology. This might take a while," said Cooper.

The research was funded by NASA's Astrobiology Exobiology and Evolutionary Biology Program in Washington, D.C.