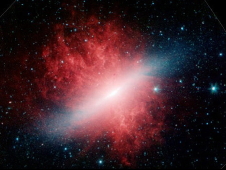 Above image combines visible-infrared Spitzer Space Telescope images of the galaxy Messier-82. The red streaming away from the galaxy into intergalactic space traces the infrared emission from PAHs.
Click image for full-resolution. 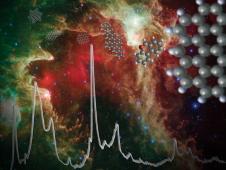 Above image is an interstellar nebula, showing the emission from PAHs in red, some PAH molecular structures and the interstellar PAH infrared signature.
Click image for full-resolution.

MOFFETT FIELD, Calif. -- NASA scientists created a unique collection of polycyclic aromatic hydrocarbon (PAH) spectra to interpret mysterious emission from space. Because PAHs are a major product of combustion, remain in the environment, and are carcinogenic, the value of this PAH spectral collection extends far beyond NASA and astronomical applications.

For years, scientists have been studying a mysterious infrared glow from the Milky Way and other galaxies, radiating from dusty regions in deep space. By duplicating the harsh conditions of space in their laboratories and computers, scientists have identified the mystifying infrared emiters as PAHs. PAHs are flat, chicken-wire shaped, nano-sized molecules that are very common on Earth.

To manage the research data, NASA built a database that now can be shared over the internet. It’s the world’s largest collection of PAH infrared data, and the website contains nearly 700 spectra of PAHs in their neutral and electrically charged states. In addition, it has tools to download PAH spectra ranging in temperature from minus 470 to 2000 degrees Fahrenheit. Thanks to these spectra, PAHs are now known to be abundant throughout the universe, but in exotic forms not readily found on Earth.

This mysterious infrared radiation from interstellar space was discovered in the 1970’s and 1980’s. While the infrared signature hinted that PAHs might be responsible, laboratory spectra of only a handful of small, individual PAHs were available to test this idea. To make matters worse, these were only for neutral, solid PAHs, not representive for PAHs as they would be in space, where they’d be electrically charged, very cold, individual molecules floating in the gas.

By the mid-1990's, observations showed this infrared emission as surprisingly common and widespread across the universe, implying that the unknown carrier was abundant and important. To better understand PAHs, then thought to be too complex to be present in space, their spectra were measured under astronomical conditions.

To capture their spectra, Allamandola led a team of scientists to measure PAH spectra under simulated astronomical conditions and with computer software. This team consisted of experts in many different fields. "This group made a tremendous effort to make this a reality," said Allamandola. "There are now nearly 700 spectra in the database. Six hundred of these have been theoretically computed, and sixty have been measured in the laboratory. The theoretical spectra span the range from two to 2000 microns, the experimental spectra cover two to 25 microns."

The spectra have given insights into the PAHs in space that were impossible to get any other way. Scientists predict that in the near future these spectra will be especially valuable for interpreting observations made with NASA's new airborne observatory, the Stratospheric Observatory for Infrared Astronomy (SOFIA) and the recently launched European Space Agency's (ESA) Herschel Telescope.

They tried to make the website user friendly for researchers. One can explore the database by charge, composition and spectral signatures. Tools allow users to do analyses online. For example, spectra can be combined to create a `composite' signature that can be compared directly to the spectrum of ‘unknown’ material.

"We will expand the database and tools,” said Christiaan Boersma, a NASA postdoctoral fellow at Ames, who designed and developed many parts of the website and tools. "We now use the database to interpret astronomical observations from star and planet forming regions in our galaxy, the Milky Way, and even other galaxies."

“Initially, our hope was to help interpret the experimental spectra, but over time, our computational capabilities made it possible to study molecules much larger than can be studied in the laboratory,” said Charles Bauschlicher, Jr., a world renowned computational chemist at NASA Ames.

"Thanks to the great sensitivity of the Spitzer Telescope, PAHs are seen across the universe, removing any doubt of the importance of these species,” said Allamandola.