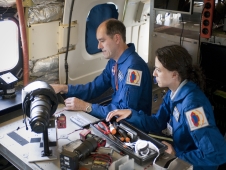 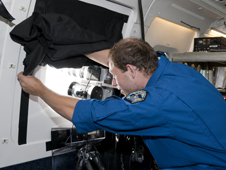 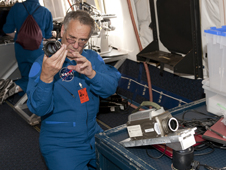 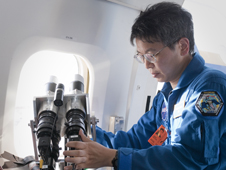 Hideyuki Tanno, of the Japan Aerospace Exploration Kakuda Space Center prepares instruments aboard NASA's DC-8 flying laboratory. Photo Credit: NASA /Dryden/Tom Tschida
›  Link to larger photo
MOFFETT FIELD, Calif. -- A group of astronomers from NASA, the Japan Aerospace Exploration Agency (JAXA) and other organizations are flying to the other side of the world for a front row seat and a rare opportunity to study a spacecraft's targeted fiery descent through Earth's atmosphere.

A Douglas DC-8 airborne laboratory departed yesterday evening from NASA’s Dryden Aircraft Operations Facility at Palmdale, Calif., carrying nearly 30 scientists and their instruments to Melbourne, Australia to make final preparations for the highly-anticipated return of JAXA's Hayabusa spacecraft. This luminous re-entry will mark the end of the spacecraft's seven-year journey to bring a sample of asteroid Itokawa back to Earth. Hayabusa is expected to fall to Earth over a vast, unpopulated area of Australia at approximately midnight locally, or 7 a.m. PDT, on Sunday, June 13, 2010. Earlier this week, JAXA announced it successfully completed the guidance of the Hayabusa spacecraft, so that it will land in the Woomera Prohibited Area in Australia.

"Hayabusa is hurtling toward Earth at an immense speed, comparable to that of an asteroid impact," said Peter Jenniskens, the observation campaign's principal investigator and a scientist at NASA's Ames Research Center, Moffett Field, Calif., and the SETI Institute, Mountain View, Calif. "The capsule that protects the asteroid sample will be only 6,500 feet ahead of the rest of the spacecraft, which will break into numerous pieces, essentially making it a man-made meteor."

Jenniskens and the team of astronomers onboard the DC-8 will have their instruments secured near the plane's specialized windows. This, paired with their altitude of 39,000 feet far above light pollution and clouds, will enable the scientists to study what happens when the spacecraft and sample return capsule heat up high in the atmosphere. When Hayabusa reaches an altitude of 190,000 feet, its heat shield will experience temperatures of more than 5,000 degrees Fahrenheit, while the gas surrounding the capsule will reach 13,000 degrees Fahrenheit - hotter than the surface of the sun.

The team’s primary goal during the airborne mission is to study the Hayabusa capsule's re-entry to gain technological insight into the heat shield that designers and engineers can use while developing future exploration vehicles. Because of Hayabusa's unique heat shield material, shape and the tremendous interplanetary re-entry speed of 7.58 miles per second, scientists expect its descent will provide new, valuable information about heat shields for computer models of re-entry conditions. JAXA’s Hayabusa is expected to be the second fastest man-made object to return to Earth; NASA's Stardust sample return capsule set the record re-entry speed of 7.95 miles per second in January 2006.

"The return of Hayabusa provides NASA and JAXA with a rare opportunity to monitor the performance of an atmospheric entry vehicle at speeds much higher than that of the space shuttle returning from low-Earth orbit," said Jay Grinstead, the observation campaign project manager and a research scientist at NASA Ames. "The spectrum of the light emitted by the gas and surface at these extreme temperatures tells us about the physics and chemistry of atmospheric entry. Our vantage point onboard the DC-8 and the variety of instruments enable us to track the evolution of the spectrum and compare it to simulations used for design and analysis of entry systems."

The airborne observation team also will provide JAXA with data and images obtained during the flight to correlate with JAXA's ground optical and radio observations and assist in locating the capsule on Earth. Since the breakup of the main spacecraft will be visible as well, scientists will use images of the debris to validate computer models astronomers use to predict how an object will fragment and disperse as it enters Earth’s atmosphere at these high speeds.

NASA astronomers made similar airborne studies from NASA's DC-8 flying observatory for the September 2008 re-entry of the European Space Agency's Automated Transfer Vehicle "Jules Verne," as well as the Stardust sample return re-entry airborne campaigns. During those missions, NASA scientists studied the light emitted by the descending spacecraft, to better understand the mechanisms of atmospheric entry heats of natural and man-made objects.

The Hayabusa airborne observation campaign is supported by the In-Space Propulsion Technology Project in the Science Mission Directorate at NASA Headquarters, Washington.

For more information about NASA and its programs, visit:

For more information about the Hayabusa airborne observation campaign, visit:

For more images on the Hayabusa spacecraft re-entry, visit:


To view a video of the Hayabusa spacecraft re-entry, visit: