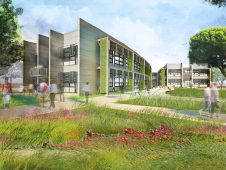 Artist's rendition of the courtyard area for the Sustainability Base.
Click image for full resolution. 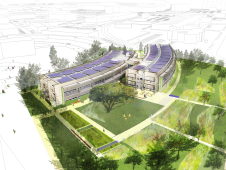 Artist's rendition of the Sustainability Base from an aerial view.
Click image for full resolution. 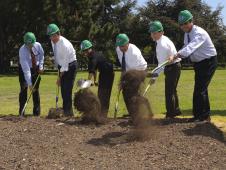 The new, environmentally friendly building at NASA’s Ames Research Center, Moffett Field, Calif. is being named 'Sustainability Base' in honor of the first humans to walk on the surface of another world from their Tranquility Base Apollo 11 lunar landing site 40 years ago. It will serve as a highly efficient collaborative support facility providing workspace for a wide range of NASA’s aeronautics and space exploration missions.

"This is a great day for NASA and the federal government,” said S. Pete Worden, director of NASA Ames. “This new building represents NASA’s commitment to sustainability and improving the quality of life on the planet. Given the incorporation of the very latest NASA technologies, I like to think of it as the first lunar outpost on Earth.”

"When the Apollo astronauts looked back and saw the Earth . . . it was such an astounding image that it served as a touchstone for the whole environmental movement," said Steven Zornetzer, associate director at NASA Ames. “In the spirit of what’s best for our country, we decided to focus on constructing the most energy-efficient building possible.

The new building is designed to achieve a platinum rating under the Leadership in Energy and Environmental Design (LEED) new construction standards for environmentally sustainable construction developed by the U.S. Green Building Council, Washington. D.C. The building will feature near zero net energy consumption, use 90 percent less potable water than conventionally built buildings of equivalent size and reduce building maintenance costs. The building will showcase some of NASA’s most advanced intelligent control technologies originally developed to support the nation’s human and robotic space exploration missions.

The Silicon Valley office of Swinerton Builders, San Francisco, Calif., was selected in a competitive-bid process to build the new Sustainability Base collaborative support facility. Construction of the $20.6 million building is scheduled for completion by the end of 2011.

To help achieve the building’s sustainability objectives, the company will install approximately 72 geothermal wells featuring ground-source heat pumps, and will provide parking and landscaping with California-native plants. In addition, the company will install sophisticated systems for solar water heating, fire detection and suppression, advanced lighting, security, communications operations and site storm water management. These systems will be designed to anticipate and automatically react to changes in sunlight, temperature, and wind, and use resources to optimize the building's performance.

The new facility will feature a structural steel frame, stand two stories tall with two wings, and will have approximately 50,000 square feet of mostly-open collaborative workspace, lunchrooms and a glass-walled atrium.

To watch a video about the Sustainability Base to be built at NASA's Ames, visit:


For more information about the Greenspace Initiative at NASA's Ames, visit:


For information about NASA programs, visit: