RELEASE : 09-104AR NASA Research Reveals Major Insight Into Evolution of Life on Earth MOFFETT FIELD, Calif. -- Humans might not be walking on Earth today if not for the ancient fusing of two microscopic, single-celled organisms called prokaryotes, NASA-funded research has found. 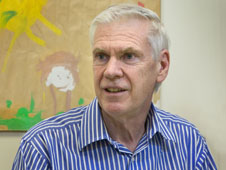 This endosymbiosis, or merging of two cells, enabled the evolution of a highly stable and successful organism with the capacity to use energy from sunlight via photosynthesis. Further evolution led to photosynthetic organisms producing oxygen as a byproduct. The resulting oxygenation of Earth's atmosphere profoundly affected the evolution of life, leading to more complex organisms that consumed oxygen, which were the ancestors of modern oxygen-breathing creatures including humans.

"Higher life would not have happened without this event," Lake said. "These are very important organisms. At the time these two early prokaryotes were evolving, there was no oxygen in the Earth's atmosphere. Humans could not live. No oxygen-breathing organisms could live."

The genetic machinery and structural organization of these two organisms merged to produce a new class of prokaryotes, called double membrane prokaryotes. As they evolved, members of this double membrane class, called cyanobacteria, became the primary oxygen-producers on the planet, generating enough oxygen to alter the chemical composition of the atmosphere and set the stage for the evolution of more complex organisms such as animals and plants.

"This work is a major advance in our understanding of how a group of organisms came to be that learned to harness the sun and then effected the greatest environmental change Earth has ever seen, in this case with beneficial results," said Carl Pilcher, director of the NASA Astrobiology Institute at NASA's Ames Research Center in Moffett Field, Calif., which co-funded the study with the National Science Foundation in Arlington, Va.

The institute is part of NASA's Astrobiology Program in Washington. The program supports research into the origin, evolution, distribution and future of life on Earth and the potential for life elsewhere.

For more information about the NASA's Astrobiology Program and the institute, visit: http://astrobiology.nasa.gov.