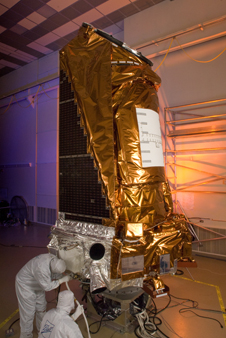 The mission, scheduled to launch on March 5, 2009, will seek to answer an age-old question -- are there other Earths in space?

"Kepler is ready to begin its journey to its launch site, and ultimately to space, where it will answer a question that has been pondered by humankind at least as long ago as the ancient Greeks," said James Fanson, the project manager for the mission at NASA's Jet Propulsion Laboratory, Pasadena, Calif.

Kepler will monitor more than 100,000 stars for signatures of planets of various sizes and orbital distances. It has the ability to locate rocky planets like Earth, including those that lie in a star's "habitable zone," a region where liquid water, and perhaps life, could exist. If these Earth-size worlds do exist around stars like our sun, Kepler is expected to be the first to find them, and the first to measure their frequency.

"Kepler's mission is to determine whether Earth-size planets in the habitable zone of other stars are frequent or rare; whether life in our Milky Way galaxy is likely to be frequent or rare," said William Borucki, the Kepler science principal investigator at NASA's Ames Research Center, Moffett Field, Calif.

Kepler is currently at Ball Aerospace & Technologies Corp. in Boulder, Colo. It passed all its environmental tests ensuring that it is prepared for the harsh trip to space. It also passed what's called the "pre-ship review," meaning that it is ready to be shipped via convoy to Florida in early January. Its first stop will be Astrotech in Titusville, Fla., where the spacecraft will be processed before being carried to its launch pad at Cape Canaveral. Kepler will launch atop a Delta II rocket.

"An outstanding team of engineers overcame some difficult hurdles to achieve this considerable milestone," said Ball Aerospace Program Manager John Troeltzsch. "The culmination of this effort will put a spectacular mission in orbit designed to increase our understanding of the cosmos."

Kepler is a NASA Discovery mission. In addition to being the home organization of the science principal investigator, NASA Ames Research Center is responsible for the ground system development, mission operations and science data analysis. Kepler mission development is managed by the Jet Propulsion Laboratory. Ball Aerospace & Technologies Corp. is responsible for developing the Kepler flight system and supporting mission operations.

For more information about the Kepler mission, visit:

If you are a news media professional who would like to sign up for the 'local-reporters'" e-mail list for alerts about NASA feature stories on the web, please e-mail your request to Jonas Dino, Jonas.Dino@nasa.gov or give him a call at 650-604-5612. To unsubscribe, send an e-mail to local-reporters-request@lists.arc.nasa.gov with "unsubscribe" in the subject line.