NASA Ames Contributions to the Apollo Moon Missions The Apollo encounter with our moon was one of the defining events of the last century. Apollo forever changed the way we look at the moon, at the Earth and at NASA. Anyone over the age of 30 can look up at the moon today and personally remember that 12 men once walked there. They can recall how thrilling were those late-night, black-and-white images of the small plots of lunar soil around where the lunar landers camped. For those under 30--and that includes some holding PhDs in space science, and some with star-struck kids of their own--they learned that the last man to have trod the lunar landscape did so before they were even born. When these youngsters think about the moon and wonder why we have only returned to the moon twice since then, once through a robotic probe developed by NASA researchers at Ames, perhaps they conclude that that early generation of explorers found the moon an even more barren rock than they had imagined. Apollo changed how we think about our moon.
-Glenn E. Bugos

America's lunar spacecraft, Apollo, will return to the Earth's atmosphere at much higher speeds than those experienced by a satellite returning from orbit. It will experience heating much more intense as a direct consequence of its higher speed. Research to understand and conquer the heating problem for Apollo is moving forward rapidly at Ames Research Center in facilities like the Combined Radiative-Convective Heating Simulator. While convective heating is important for entering satellites, radiative heating grows more serious at higher speeds. Hence NASA scientists have devised a research implement in which both kinds of heating can be directed upon a test model at the same time. Intense radiation is generated by an electrical arc of the kind used in theater-type motion picture projectors. At the same, an air stream charged with energy from a separate electric arc source is driven over the test specimen. The intense radiation which results is apparent in the photograph. Through their ability to vary each type of heating independently, NASA scientists are better equipped to obtain fundamental knowledge of heating vital to the success of manned missions into space. 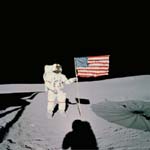 Apollo 11 Astronauts Armstrong and Aldrin homeward bound, inside the ascent stage of the Lunar Module just after taking off from the Moon, start the first leg of their return trip to Earth, shown above the curving lunar surface. 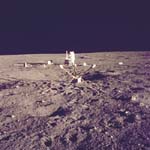 Apollo navigation simulator, used to test concepts for midcourse correction on the Voyage to and from he Moon (August 30, 1962)