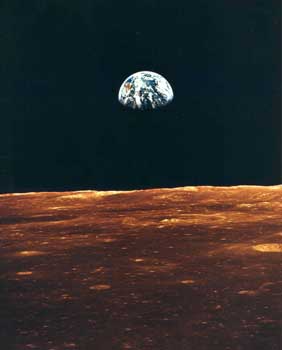 “During Apollo, Ames supported Houston in many of the biomedical areas and became heavily involved in the chemical and biological analysis of lunar samples.”

“The major problems connected to spaceflight focused on speed, the heat generated by speed, and control of the vehicle during flight. Ames’ facilities lent themselves to research in these areas in a number of ways. Early in the 1960’s, for example, models of the Mercury and Gemini capsules were tested in the hypervelocity free-flight facility, where airflow patterns were studied and stability experiments were performed. In 1962 flight simulators and Apollo capsule models were used to test spacesuit designs. Under flight conditions, astronauts tested the suits” mobility, efficiency, and comfort, as well as the ease with which the instrument panel was operated.

The center’s (Ames’) changed position within the parent organization was well illustrated in the case of the Apollo guidance system, development of which began in 1962. Responsibility was apportioned in a manner foreign to the (National Advisory Committee for Aeronautics, NASA’s predecessor) NACA scheme of things, but necessary in the complexities of a lunar landing mission. Massachusetts Institute of Technology had been awarded a NASA contract for the design and development of a prototype guidance system. In supporting MIT, Ames was given the task of working on midcourse and Earth-entry guidance. In particular, Ames computers were used to work out trajectories and correction factors for speed, angle of descent, and shape of the reentry body.   The problem of reentry heating of spacecraft presented a variety of related questions. An early realization was that the heating problem was two-fold: Not only would convective heating occur as the spacecraft reentered the EarthÕs atmosphere, there was also a problem of radiative heating caused by the high temperature rise in the air disturbed by the vehicle’s shock wave. Radiative heat increased dramatically in the case of blunt bodies, which (Ames’ Harvey) Allen had shown years before to be effective in controlling convective heating. The research question lay in the trade-off between the two shapes to minimize undesirable effects, blunt body to control convective heat, missile-shaped to control radiative heat.   Crucially connected to the heating problem was ablation, the process by which heat is absorbed through melting, evaporation, and sublimation. By coating a surface with an ablative material, much heat can be dissipated before the primary structure is affected. The (Ames) arc-jet facilities proved most useful in the study of how ablation proceeds and what materials work best, especially because of the relatively long test times they made possible. As with his blunt-body work of the early 1950’s, Harvey Allen and his colleagues went far toward solving the heating problem for high-speed reentry spacecraft by adopting a cone shape. Making the tip of the cone of a continually renewed ablation material solved much of the heat problem.   The study of ablation led Ames to meteoroid studies in the 1960s. By studying the materials of which meteors were composed and by calculating flights and landing patterns of meteors, researchers hoped to learn more not only about high-speed heating but about the composition of other planets and the space environment in which meteors are produced. Work on ablation was to lead Dean Chapman, later head of the (Ames) Astronautics Directorate, to his long study of tektites, glass pellets that have been found at various places on the EarthÕs surface. Bringing aerodynamic theories to the study of tektites, Chapman developed a hypothesis on their origin based on study of the heating patterns displayed by the pellets’ shape and calculation of their flight speed. The origin of tektites, he suggested, was the Moon. The tektite hypothesis provided a new perspective on the materials composing the Moon, and the forces that produced its craters. The tektite research became a prominent example of the thin line between applied and basic research and a happy reminder that a scientist can, with imagination, move back and forth between the two.”

This book was published in 1985 and is a U.S. Government document, which is not copyrighted.

Searching the Horizon, A History of Ames Research Center 1940-1976 excerpts