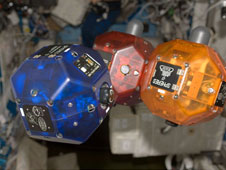 In 1999, Massachusetts Institute of Technology (MIT) professor David Miller showed the movie, "Star Wars" to his students on their first day of class. Following the scene where Luke Skywalker spars with a floating droid "remote," Miller stood up and pointed: "I want you to build me some of those." So they did. With support from the Department of Defense and NASA, Miller's undergraduates built five volleyball-sized free-flying satellites called Synchronized Position Hold, Engage, Reorient, Experimental Satellites (SPHERES); three of which have been on the International Space Station since 2006.

"I love my job, because I get to use cutting-edge technologies to answer questions like: 'How can robots help humans live and work in space? What will happen when humans explore other worlds with robots by their side? Can we make this happen sooner, rather than later?'" said Terry Fong, director of the Intelligent Robotics Group at NASA's Ames Research Center, Moffett Field, Calif.

To begin answering these questions, NASA is equipping the trio of SPHERES on the space station with a Nexus™ S handset made by Samsung Electronics and powered by Google’s Android™ platform. 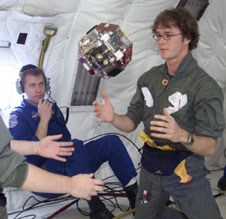 Each SPHERE Satellite is self-contained with power, propulsion, computing and navigation equipment. When Miller's team first designed the SPHERES, all of their potential uses couldn’t be imagined up front. So, the team built an "expansion port" into each satellite where additional sensors and appendages, such as cameras and wireless power transfer systems, could be added. This is how the Nexus S handset – the SPHERES' first smartphone upgrade – is going to be attached.

"Because the SPHERES were originally designed for a different purpose, they need some upgrades to become remotely operated robots," said DW Wheeler, lead engineer in the Intelligent Robotics Group at Ames. "By connecting a smartphone, we can immediately make SPHERES more intelligent. With the smartphone, the SPHERES will have a built-in camera to take pictures and video, sensors to help conduct inspections, a powerful computing unit to make calculations, and a Wi-Fi connection that we will use to transfer data in real-time to the space station and mission control."

Nexus S is the first commercial smartphone certified by NASA to fly on the space shuttle and to be cleared for use on the space station. The smartphone includes a four-inch touchscreen display, a 1-GHz processor, digital cameras, gyroscopes, accelerometers, proximity and light sensors, Bluetooth and Wi-Fi networking, as well as 16 gigabytes of internal memory. And, as with an increasing number of smartphones, Nexus S uses the open-source Android platform.

"Android is a very important feature for our team," said Mark Micire, a software engineer in the Intelligent Robotics Group. "The availability of the Android source code allows us to customize the smartphone to be used as a compact, low-cost, low-power computer, rather than just as a phone. And because the platform is open-source, we anticipate that the public will be able to develop Android software that can be used in our experiments. In the future, you are going see smartphones used for all sorts of embedded processing applications, from robotics to sensor networks and equipment control," Micire said. 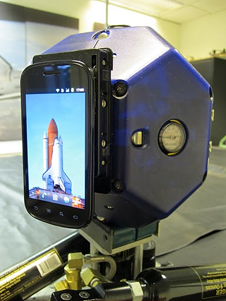 Since 2006, astronauts have conducted more than 25 experiments using SPHERES to test techniques to advance automated dockings, satellite servicing, spacecraft assembly and emergency repairs. So far, all the tests have used pre-programmed algorithms to achieve specific flight formations, but now researchers are preparing to control the SPHERES in real-time from ground control stations on Earth and from space.

"Mission control can remotely operate the smartphone-enhanced SPHERES to perform inventory and environmental surveys on the ISS," said Fong. "That way, astronauts can spend more time performing science experiments and other work, instead of routine maintenance. In the long run, free-flying robots like SPHERES could also be used to inspect the exterior of the space station or future deep-space vehicles."

According to Fong, robots like the smartphone-enhanced SPHERES and NASA's Robonaut 2 (--> link to http://www.nasa.gov/robonaut), will provide some of the help of another crewmember; SPHERES' cameras can act as another set of eyes, while the Robotnaut2 literally adds another set of hands to act as an assistant with small and bulky items alike. An added bonus is that robots do not require any additional life support. 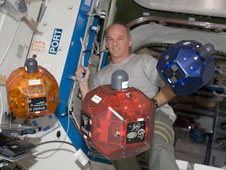 
> View Zero Robotics video
"We'll start by simulating a mobile inspection of the station to test how well SPHERES can move around and collect data using the smartphone's camera and sensors," said Fong. "This will tell us basic information about the light and sound levels inside various areas of the station. Then we'll use SPHERES to conduct an interview with a crewmember – a task that usually requires two crewmembers to complete. We'll have mission control and the smartphone-enhanced SPHERES take the place of the astronaut holding the video camera."

As with the Robonaut 2, all tests thus far have occurred in the safety of the space station’s interior. However, in the future, upgraded SPHERES may venture outside the space station as well.

"The space station is just the first step to using remotely controlled robots to support human exploration," said Chris Moore, program executive in the Exploration Systems Mission Directorate at NASA Headquarters in Washington. "Building on our experience in controlling robots on station, one day we'll be able to apply what we've learned and have humans and robots working together everywhere from earth orbit, to the moon, asteroids, and Mars."

This smartphone-enhanced SPHERES experiment is managed by the Intelligent Robotics Group at Ames with funding from the Enabling Technology Development and Demonstration Program in the Exploration Systems Mission Directorate.