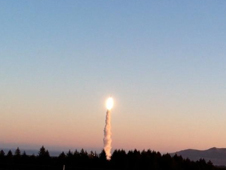 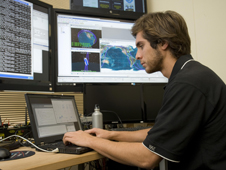 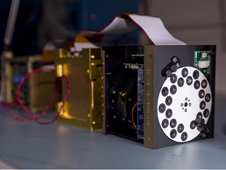 Click image for full-resolution.
The O/OREOS payloads and bus undergo functional tests before integration with the satellite frame.
Image credit: NASA/Dominic Hart
More than one hundred days ago, on Nov. 19, 2010, NASA sent a small satellite about the size of a loaf of bread on an important mission to answer astrobiology’s fundamental questions about the origin, evolution and distribution of life in the universe.

Since then, the nanosatellite, known as Organism/Organic Exposure to Orbital Stresses (O/OREOS) continues on its quest, which has taken it just about everywhere between the Arctic and Antarctic Circles more than 400 miles above Earth's surface.

O/OREOS weighs approximately 12 pounds and is NASA’s first CubeSat to demonstrate the capability to have two distinct, completely independent science experiments on a single autonomous satellite. O/OREOS is using NASA’s first propellant-less mechanism on a scientific satellite to ensure it de-orbits and burns up as it re-enters Earth’s atmosphere, less than 25 years after completing its mission. It's also the first nanosatellite to not only operate, but also conduct autonomous biological and chemical measurements, in the region of space known as the exosphere.

"The fact that we're getting consistently good science data in such a challenging environment tells us that secondary payload nanosatellites like O/OREOS can be made rugged enough to enhance our opportunities to conduct research in low Earth orbit," said Antonio Ricco, instrument scientist for O/OREOS and a researcher at NASA's Ames Research Center, Moffett Field, Calif. "This is enabling us to study organics, microorganisms, and astrobiology in the space environment in real time."

O/OREOS was a secondary payload aboard a U.S. Air Force four-stage Minotaur IV rocket launched from the Alaska Aerospace Corporation’s Kodiak Launch Complex on Kodiak Island, Alaska. After O/OREOS separated from the rocket and successfully entered low Earth orbit, it activated and began transmitting radio signals to ground control stations and spacecraft operators in the mission control center at Santa Clara University, Santa Clara, Calif. Nearly daily two-way communications with the spacecraft provided valuable information about its health, status and science data, and have given scientists the ability to fine tune the science payloads’ operating parameters.

On Dec. 3, 2010, two weeks after O/OREOS deployed, the first of three biological experiments began operating automatically within the Space Environment Survivability of Living Organisms (SESLO) payload; and was successfully completed just 24 hours later. On Feb. 18, 2011, the second part of the SESLO biological experiment began and also was successfully finished in one day. The experiment is designed to characterize the growth, activity, health and ability of microorganisms commonly found in soil and salt ponds in a dried and dormant state - Bacillus subtilis and Halorubrum chaoviatoris – to adapt to the stresses of outer space by rehydrating, or “feeding,” and growing them using dyed liquid nutrients. Scientists will compare the microbes' population density and change in color at three different times during the mission to determine how and if their behavior changes with longer exposure to radiation and weightless conditions in space.

"Days before the second part of the SESLO experiment began, a large solar flare sent radiation, including energetic protons and X-rays, hurtling towards O/OREOS and Earth, yet O/OREOS still successfully completed the experiment and got some promising results that we're now evaluating," said Ricco.

Hours after reaching orbit, O/OREOS activated its other science experiment payload, called the Space Environment Viability of Organics (SEVO), which monitors the stability and changes in four classes of biologically important organic molecules as they are exposed to space conditions, most notably sunlight completely unfiltered by Earth’s atmosphere. For the SEVO experiment, scientists selected organic molecules distributed throughout our galaxy, as well as organic “biomarkers” of life as we know it on Earth. O/OREOS houses the organic samples in “micro-environments” relevant to space and planetary conditions. The experiment exposes the organic compounds to solar ultraviolet (UV) light, visible light, trapped-particle and cosmic radiation. Scientists will determine the stability of the molecules by studying changes in UV, visible, and near-infrared light absorption.

"Using the sun as its light source, O/OREOS has made nearly 500 periodic spectral measurements of the organic materials, and 200 of those have been transmitted to us so far," said Pascale Ehrenfreund, O/OREOS project scientist at George Washington University, Washington, D.C. "We are excited to see the payload's miniature spectrometer and sample positioning systems working so well and are grateful to our operations team at Santa Clara University."

The Small Spacecraft Division at Ames manages the O/OREOS payload and mission operations with the professional support of staff and students from Santa Clara University.

As with NASA's previous small satellite missions, such as the GeneSat-1 and PharmaSat, Santa Clara University invites amateur radio operators around the world to tune in to the satellite's broadcast. To date, more than 70,000 beacon data packets have been collected and provided via the Internet to the O/OREOS mission operations team by HAM operators in 19 nations.

For more information and instructions about how to tune in to O/OREOS, visit: