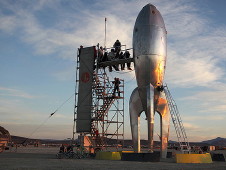 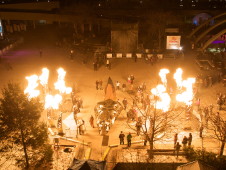 "Angel of the Apocalypse" at the Toronto Winter Festival in Fesbruary, 2010.
Photo Credit: Jess Hobbs
Click image for full-resolution. 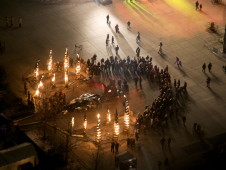 A 40-foot high rocket from the future and a 20-foot tall bird with its head and wings on fire will light up on Saturday, April 10, 2010 at NASA Ames Research Center, Moffett Field, Calif. Is this a science experiment gone awry? No, it’s all part of Yuri’s Night.

Yuri’s Night is a world space party that commemorates the anniversary of the first human spaceflight, by Russian cosmonaut Yuri Gagarin on April 12, 1961 and the first space shuttle mission 20 years later. An estimated 10,000 people are expected to attend the Bay Area celebration from noon to midnight.

During this "mash-up" of music, dance, technology, art and space, two large-scale art installations that previously have been exhibited at the Burning Man Festival will be displayed: the "Raygun Gothic Rocketship" and "Angel of the Apocalypse."

What these two giant sculptures share in common is that they both were built by dozens of team members collectively working together.

Sean Orlando, one of three lead artists for "Raygun Gothic Rocketship," said the effort required the work of 85 artists, engineers, fabricators, scientists and computer engineers. "One of the remarkable things about this group of people is how few issues there are," said Orlando. "When it comes to actual work and the design process, it truly is very collaborative."

"We’re sci-fi geeks who like to play with machines and tools," said lead artist David Shulman. "Our inspiration was from the 1930s through early 1950s when technology was within sight, but the reality of what it would entail or the Cold War pessimism had not set in yet."

The term, "Raygun Gothic" is an artistic style coined by science fiction author William Gibson. Orlando said the name refers to how people in the past imagined the future.

"We’re thrilled to be able to bring it to a NASA facility and share it with people who are interested in space exploration—both the serious side and the fun side," said Orlando.

"Angel of the Apocalypse" was originally designed for the Burning Man Festival in 2005 by Flaming Lotus Girls—a group of mostly female artists based in San Francisco.

Artistic director Jessica Hobbs said men also participate in designing and developing the sculptures, with the caveat that they refer to themselves as "flaming lotus girls."

Hobbs said the female-led organization collaborates during the design process. "We take an idea and haggle over it and get to a point of agreement," said Hobbs. "No one person dominates the design."

The inspiration for "Angel of the Apocalypse" was to use the body and mythology of the phoenix emerging from fire. The sculpture is made from stainless steel and driftwood, featuring propane-fueled flame effects. There are 16 buttons on the sculpture that the public can push to activate the flames.

"What’s exciting about Yuri’s Night is that it attracts a person who wants to explore and play, and ask questions about how things work," said Hobbs. "We love answering questions."


For more information on "Angel of the Apocalypse," visit: