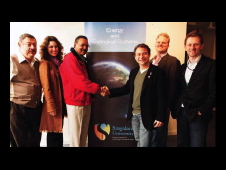 On June 19, Singularity University welcomed its second Graduate Studies Program class of 80 students to their summer home at the NASA Research Park for an intensive, ten-week program. The program is designed to facilitate understanding and collaboration across a set of rapidly advancing scientific and technological disciplines whose developments are exponentially accelerating.

"The past year of global disruption has resulted in a significant shift in the zeitgeist for exponential technologies," said Salim Ismail, Executive Director of Singularity University. "Exponential technologies can scale to meet the demands of our grand challenges. Singularity University fosters students' understanding of these accelerating and converging technologies to address humanity’s grand challenges."

Beginning with GSP-10, SU is pleased to welcome John Gage of Sun Microsystems/Kleiner Perkins as a Co-Chair of the Networks and Computing Systems track. Credited with coining the phrase "the network is the computer," Gage will lead discussions and workshops, and serve as an advisor to GSP-10 projects.

This summer, Graduate Studies Program students will self-organize into teams, tasked with the goal of "positively affecting at least a billion people." Students from last year’s summer program made impressive progress toward this goal by leveraging Singularity University’s unique resources.

Many of last year’s projects evolved into companies, now with funding and nearing public launch. "Based on the early work of the team projects from 2009, and the growing success of the spin-out companies, we expect the effects of our Graduate Studies Program alumni to be far-reaching in affecting humanity’s challenges over the coming years," said Ismail.

Through Singularity University’s collaboration with NASA, students have gained exposure to NASA’s innovative research and partnership programs, enabling a unique experience and education.