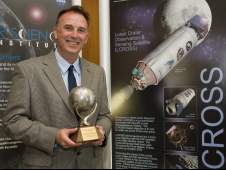 NASA has made technological breakthroughs in its efforts to reach for the stars and explore our solar system – these achievements were recently recognized by the National Space Society (NSS), which selected NASA's Lunar CRater Observation and Sensing Satellite (LCROSS) mission as the 2010 recipient of the Space Pioneer Award in the Science and Engineering category.

The award was presented at the International Space Development Conference in Chicago. The five-day symposium is a gathering of leading space experts from around the globe. The LCROSS mission was selected for its science observations, especially confirming the presence of water ice and other volatiles within a permanently shadowed region of Cabeus crater near the lunar south pole; being cost-effective fast-paced and being an example of a successful risk-tolerant space mission.

"We expect that the results of LCROSS will have a significant impact on the future course of both the scientific and manned exploration programs," said John K. Strickland, Jr., chairman of the NSS Awards Committee. "The Pioneer award is very appropriate for recognizing lunar-related efforts, since it is, in fact, a silvery pewter moon globe mounted on a base and brass support with brass plaque."

The annual Space Pioneer awards recognize individuals and teams whose accomplishments have helped to open the space frontier. The awards are divided into 13 categories with the intent of recognizing those who have made significant contributions in different fields of endeavor to "develop a space faring civilization that will establish communities beyond the Earth." Because NSS selects three Space Pioneer award recipients each year, not every category is awarded. The Indian Space Research Organization received the previous Space Pioneer award in Science and Engineering in 2009 in recognition of its successful Lunar Probe Chandrayaan-1 mission, which, with the help of NASA's Moon Mineralogy Mapper onboard instrument, detected water molecules on the lunar surface.

"I feel privileged to have represented the LCROSS team and partners," said John Marmie, LCROSS deputy project manager who accepted the award on behalf of the team. "Many people came up to me afterwards to express how impressed they were with what our team accomplished."