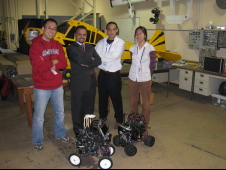 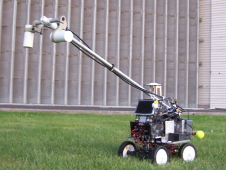 Carnegie Mellon Innovations Lab (CMIL) in collaboration with the NASA Payload Directed Flight research team from the Intelligent Systems Division at NASA Ames, and the United States Geological Survey in Menlo Park, Calif., assisted the County of Santa Clara’s District Attorney’s Office in solving a 1991 cold case murder investigation. The team deployed a Senseta MAX 5.0A Rover, an autonomous ground vehicle, to perform magnetic surveys of a vacant lot in Alviso, Calif., looking for buried material evidence, which included car parts and a possible body buried in the old junk yard. Applied research algorithms developed by NASA and CMU combined with USGS and Senseta technologies provided the means to collect data and locate the buried material evidence, which was excavated. The excavation led to a conviction and resolution of the 18 year old cold-case.

In 1991, Bernado Bass killed Dawn Sanchez, but her body and the gun used in the murder was not discovered in the ensuing investigation. Bass' car, in which Sanchez was last seen, was also missing. The case was dismissed in 1991 due to lack of evidence. The case was recently reopened, when an informant reported that the car may have been disassembled and buried in a large abandoned lot in Alviso. The exact location in the lot was not specified, and the cost to excavate the entire area was too high. Further, the lot contained a substantial amount of buried and surface metallic debris, making a simple survey with metal detectors insufficient.

The DA’s office requested surveying expertise from the USGS, who contacted NASA’s Payload Directed Flight research group for support. The NASA group was already working with CMIL and the USGS, and had developed real-time processing algorithms and platforms for magnetic and ground penetrating radar sensors hosted on small autonomous aerial and ground vehicles, for intelligent autonomous Earth Science missions.

Additionally, the NASA group was also already working closely with Senseta Inc., a Carnegie Mellon Silicon Valley spin-off specialized in aerospace technologies and unmanned intelligent systems. In response to the DA’s request, the mixed team of scientists and engineers from CMIL, NASA Ames and the USGS deployed an instrumented Senseta MAX 5.0A rover hosting the research technologies under development, and mapped the magnetic environment of the survey area. The USGS received the processed data set, and after further post-processing, presented the county DA’s office with their analysis and possible locations for excavation. Based on this data, the county excavated the site and retrieved car parts that matched the suspect’s car. Confronted with this evidence in court, on August 29, 2009, the suspect pleaded no contest to the charges, was convicted of manslaughter, and sentenced to six years in prison.

For more information about Senseta, visit: