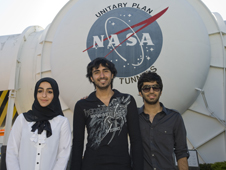 Shamma Al Qassim, 19, Hazza Bani Malek, 20 and Hamad Rajab, 21 were selected for a NASA education initiative to work with top scientists on a variety of projects, including the space shuttle and International Space Station, deep space missions, solar system exploration and aeronautics research.

As part of an agreement between NASA and the non-profit Arab Youth Venture Foundation (AYVF), up to 12 UAE students per year for three years may participate in the program. Students are sponsored by Mubadala, a part of the Abu Dhabi government, and will start their 10-week training this week.

According to S. Pete Worden, director of NASA Ames, providing young people an opportunity to learn about space exploration can create a strong friendship between great nations to pursue common dreams.

“Under this program, the goodwill generated by students working side by side with our NASA scientists and researchers will serve as a bridge between the USA and UAE, opening the doors for future collaboration in scientific research. I can only imagine what discoveries might be achieved through such cooperation,” said Worden.

Al Qassim, a computer engineering major at the American University of Sharjah, will intern with a team to analyze thermal infrared (TIR) data retrieved from NASA satellite sensor Moderate Resolution Imaging Spectroradiometer (MODIS), and determine if it can be used to predict earthquakes. As part of the internship, she also will help prepare and submit results to a peer-reviewed scientific journal.

Bani Malek, who is pursuing a major in mechatronics at the Higher Colleges of Technology in Ras Al Khaimah, will work with NASA researchers and engineers to update facility automation in the Electric Arc Shock Tube facility, which simulates the high enthalpy (heat) environment encountered by spacecraft entering planetary atmospheres. This work involves both hardware and software modification using programmable logic controllers and LabView software to automate and improve the operation of the facility.

Rajab, an electrical engineering student, will intern with NASA researchers and engineers to re-purpose a new cutting-edge water recycling system, designed for long-term duration space missions, for the new Ames ‘Green Building,’ Sustainability Base. The proposed water treatment system is a technology developed by NASA Ames, which filters wastewater for re-use and reduces water consumption.

Students will be given hands-on experience with computer software and technology, and NASA engineering expertise during all aspects of the projects.

“NASA’s space exploration research has resulted in or contributed to commercial spinoffs that have given consumers of the world innovations, such as laser technology, business jets, environmental monitoring systems, robots for aircraft maintenance, virtual reality, home insulation, night vision cameras and thousands of other popular products and applications,” said Lisa LaBonte, chief executive officer of AYVF. “NASA internships add value to a multitude of careers across some of the most dynamic sectors of the economies globally.”