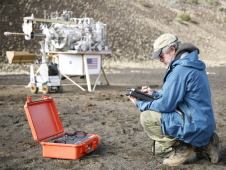 CheMin Principal Investigator David Blake, of the NASA Ames Research Center, Moffett Field, Calif., is seen here collecting data from a CheMin cousin called Terra. The scene is from a NASA field test of technology for producing water and oxygen from soil, using the Hawaiian site as an analog for the moon. In such an application, Terra could analyze the starting soils as well as products from the extraction process.
Image Credit: NASA
Click image for full-resolution. 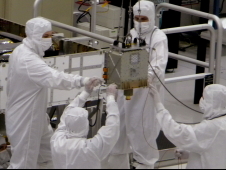 Members of NASA's Mars Science Laboratory team carefully steer the hoisted Chemistry and Mineralogy (CheMin) instrument during its June 15, 2010, installation into the mission's Mars rover, Curiosity. The main body of the rover, upside down, is in the left half of the image, behind the installers.
Image Credit: NASA/JPL-Caltech
Click image for full-resolution.

NASA's Curiosity rover, coming together for a late 2011 launch to Mars, has a newly installed component: a key onboard X-ray instrument for helping the mission achieve its goals.

Researchers will use Curiosity in an intriguing area of Mars to search for modern or ancient habitable environments, including any that may have also been favorable for preserving clues about life and environment.

The team assembling and testing Curiosity at NASA's Jet Propulsion Laboratory, Pasadena, Calif., fastened the Chemistry and Mineralogy (CheMin) instrument inside the rover body on June 15. CheMin will identify the minerals in samples of powdered rock or soil that the rover's robotic arm will deliver to an input funnel.

"Minerals give us a record of what the environment was like at the time they were formed," said the principal investigator for CheMin, David Blake of NASA's Ames Research Center, Moffett Field, Calif. Temperature, pressure, and the chemical ingredients present -- including water -- determine what minerals form and how they are altered.

The instrument uses X-ray diffraction, a first for a mission to Mars and a more definitive method for identifying minerals than any instrument on previous missions. It supplements the diffraction measurements with X-ray fluorescence capability to garner further details of composition.

X-ray diffraction works by directing an X-ray beam at a sample and recording how the X-rays are scattered by the sample's atoms. All minerals are crystalline, and in crystalline materials, atoms are arranged in an orderly, periodic structure, causing the X-rays to be scattered at predictable angles. From those angles, researchers can deduce the spacing between planes of atoms in the crystal.

"You get a series of spacings and intensities for each mineral," Blake said. "It's more than a fingerprint because it not only provides definitive identification, but we know the reason for each pattern, right down to the atomic level."

NASA's Mars Science Laboratory mission will send Curiosity to a place on Mars where water-related minerals have been detected by Mars orbiters. The rover's 10 science instruments [link to http://msl-scicorner.jpl.nasa.gov/Instruments/ ] will examine the site's modern environment and geological clues to its past environments. NASA's multi-step strategy might include potential future missions for bringing Mars samples to Earth for detailed analysis. One key goal for the Mars Science Laboratory mission is to identify a good hunting ground for rocks that could hold biosignatures -- evidence of life -- though this mission itself will not seek evidence of life.

On Earth, life has thrived for more than 3 billion years, but preserving evidence of life from the geologically distant past requires specific, unusual conditions.

Fossil insects encased in amber or mastodon skeletons immersed in tar pits are examples of how specific environments can store a record of ancient life by isolating it from normal decomposition. But Mars won't have insects or mastodons; if Mars has had any life forms at all, they were likely microbes. Understanding what types of environments may have preserved evidence of microbial life from billions of years ago, even on Earth, is still an emerging field of study. Some factors good for life are bad for preserving biosignatures. For example, life needs water, but organic compounds, the carbon-chemical ingredients of life, generally oxidize to carbon dioxide gas if not protected from water.

Some minerals detectable by CheMin, such as phosphates, carbonates, sulfates and silica, can help preserve biosignatures. Clay minerals trap and preserve organic compounds under some conditions. Some minerals that form when salty water evaporates can encase and protect organics, too. Other minerals that CheMin could detect might also have implications about past conditions favorable to life and to preservation of biosignatures.

"We'll finally have the ability to conduct a wide-ranging inventory of the minerals for one part of Mars," said John Grotzinger of the California Institute of Technology in Pasadena, chief scientist for the Mars Science Laboratory. "This will be a big step forward. Whatever we learn about conditions for life, we'll also get a great benefit in learning about the early evolution of a planet."

Curiosity's 10 science instruments, with about 15 times more mass than the five-instrument science payload on either of the Mars rovers Spirit or Opportunity, provide complementary capabilities for meeting the mission's goals. Some will provide quicker evaluations of rocks when the rover drives to a new location, helping the science team choose which rocks to examine more thoroughly with CheMin and the Sample Analysis at Mars (SAM) experiment. SAM can identify organic compounds. Imaging information about the context and textures of rocks will augment information about the rocks' composition.

"CheMin will tell us the major minerals there without a lot of debate," said Jack Farmer of Arizona State University, Tempe, a member of the instrument's science team. "It won’t necessarily reveal anything definitive about biosignatures, but it will help us select the rocks to check for organics. X-ray diffraction is the gold standard for mineralogy. Anyone who wants to determine the minerals in a rock on Earth takes it to an X-ray diffraction lab."

Blake began working 21 years ago on a compact X-ray diffraction instrument for use in planetary missions. His work with colleagues has resulted in commercial portable instruments for use in geological field work on Earth, as well as the CheMin instrument. The spinoff instruments have found innovative applications in screening for counterfeit pharmaceuticals in developing nations and analyzing archaeological finds.

CheMin is roughly a cube 25 centimeters (10 inches) on each side, weighing about 10 kilograms (22 pounds). It generates X-rays by aiming high-energy electrons at a target of cobalt, then directing the X-rays into a narrow beam. The detector is a charge-coupled device like the ones in electronic cameras, but sensitive to X-ray wavelengths and cooled to minus 60 degrees Celsius (minus 76 degrees Fahrenheit).

A sample wheel mounted between the X-ray source and detector holds 32 disc-shaped sample cells, each about the diameter of a shirt button and thickness of a business card, with transparent plastic walls. Rotating the wheel can position any cell into the X-ray beam. Five cells hold reference samples from Earth to help calibrate the instrument. The other 27 are reusable holders for Martian samples. Samples of gritty powder delivered by the robotic arm to CheMin's inlet funnel will each contain about as much material as in a baby aspirin.

Each CheMin analysis of a sample requires up to 10 hours of accumulating data while X-rays are hitting the sample. The time may be split into two or more nights of operation.

Besides X-ray diffraction, CheMin records X-ray fluorescence data from the analyzed material. X-ray fluorescence works by recording the secondary X-rays generated when the atoms in the sample are excited by the primary X-ray source. Different elements, when excited, emit fluorescent X-rays at different and characteristic energies, so this information indicates which elements are present. This compositional information will supplement similar data collected by the Alpha Particle X-ray Spectrometer on Curiosity's arm.

The launch period for the Mars Science Laboratory will begin on Nov. 25, 2011, for a landing on Mars in August 2012. Blake's wish for results from the Martian rock data he's already been anticipating for more than two decades: "I hope we find something unexpected, something surprising." Guy Webster
Jet Propulsion Laboratory, Pasadena, Calif.