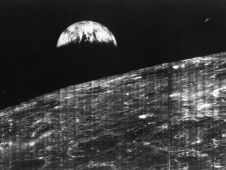 The world's first view of Earth as released to the public taken by a spacecraft from the vicinity of the Moon. The photo was transmitted to Earth by the United States Lunar Orbiter I. 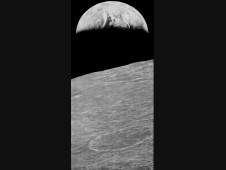 A newly restored 42-year-old image of Earth. The Lunar Orbiter 1 spacecraft took the iconic photograph of Earth rising above the lunar surface in 1966. Using refurbished machinery and modern digital technology, NASA produced the image at a much higher resolution than was possible when it was originally taken.

For more information, visit: http://www.moonviews.com/
› Back To Top