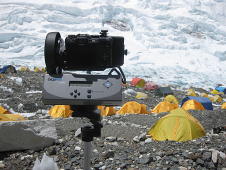 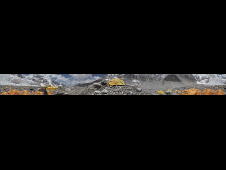 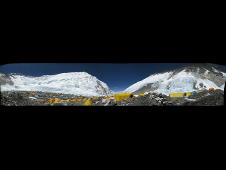 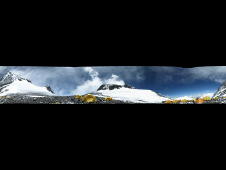 Panorama taken at Camp IV, Mt. Everest.
Credit: Scott Parazynski
Click image for full resolution.
On May 20, 2009, former NASA astronaut and Ames employee Scott Parazynski became the first person to have been to space and to climb to the summit of Mount Everest. On his way to the summit Parazynski was able to capture several photographic panoramas from record-setting heights.

An avid climber, Parazynski's main goal was to scale the majestic mountain. However, on his way up, Parazynski also captured two GigaPan panoramic images. He used a GigaPan Epic, a precision robotic camera mount that allows a series of finely coordinated high-resolution images to be taken of a large expanse of scenery. After the images were taken, special software stitched them together to form one dynamic panoramic image containing millions of pixels in breathtaking detail. To see these images, visit: http://www.gigapan.org.

Keith Cowing was stationed at Everest Base Camp for a month so as to collect and relay Parazynski's progress to friends and followers. Cowing and Parazynski are both members of the Board of Directors of the Challenger Center for Space Science Education (http://www.challenger.org) headquartered in Alexandria, Va. To read more about their expedition, visit: http://www.onorbit.com/everest.

GigaPan was developed by Carnegie Mellon University in collaboration with the NASA Ames Research Center's Intelligent Robotics Group, with support from Google, to create high-resolution panoramic images. GigaPan Systems was established in 2008 to bring this powerful, high-resolution imaging capability to a broad audience as a commercial spin-off.