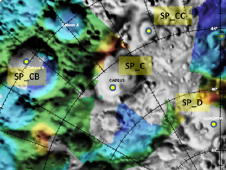 NASA's Lunar Crater Observation and Sensing Satellite mission (LCROSS) based on new analysis of available lunar data, has shifted the target crater from Cabeus A to Cabeus (proper).

The decision was based on continued evaluation of all available data and consultation/input from members of the LCROSS Science Team and the scientific community, including impact experts, ground and space based observers, and observations from Lunar Reconnaissance Orbiter (LRO), Lunar Prospector (LP), Chandrayaan-1 and JAXA's Kaguya spacecraft. This decision was prompted by the current best understanding of hydrogen concentrations in the Cabeus region, including cross-correlation between the latest LRO results and LP data sets.

The general consensus of lunar experts led by the LCROSS science team is that Cabeus shows, with the greatest level of certainty, the highest hydrogen concentrations at the south pole. Further consideration of the most current terrain models provided by JAXA's Kaguya spacecraft and the LRO Lunar Orbiter Laser Altimeter (LOLA) was important in the decision process.The models show a small valley in an otherwise tall Cabeus perimeter ridge, which will allow for sunlight to illuminate the ejecta cloud on Oct. 9, and much sooner than previously estimated for Cabeus. While the ejecta does have to fly to higher elevations to be observed by Earth assets, a shadow cast by a large hill along the Cabeus ridge, provides an excellent, high-contrast, back drop for ejecta and vapor measurements.

The LCROSS team concluded that Cabeus provided the best chance for meeting its mission goals. The team critically assessed and successfully advocated for the change with the Lunar Precursor Robotic Program (LPRP) office. The change in impact crater was factored into LCROSS' most recent Trajectory Correction Maneuver, TCM7.

During the last days of the mission, the LCROSS team will continue to refine the exact point of impact within Cabeus crater to avoid rough spots, and to maximize solar illumination of the debris plume and Earth observations.