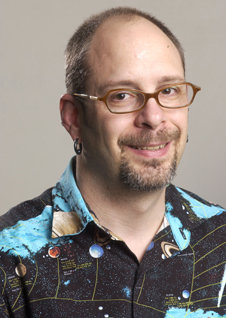 Image of Jon Jenkins
Photo Credit: Seth Shostak/SETI Institute
MOFFETT FIELD, Calif. - In the 1960s, two employees from NASA's Kennedy Space Center (KSC) met on a blind date. The couple eventually married and had twin identical boys – one of whom has grown up to be the lead for the data analysis group of NASA's Kepler Mission - Jon Jenkins of NASA's Ames Research Center, Moffett Field, Calif.

Jenkins was born in Hollywood, Fla., in 1965. His father worked on many launches for KSC. Jenkins fondly remembers his father taking him and his brothers out of school to watch the Apollo-Soyuz Test Project, the first joint flight of the U.S. and Soviet space programs.

In 1972, his family moved to Oak Ridge, Tenn. where Jenkins and his twin attended Oak Ridge High School. Eventually, Jenkins family moved back to Cape Canaveral so his father could continue working at KSC. In 1983, Jenkins graduated from Merritt Island High School in Merritt Island, Fla. Jenkins received a full scholarship from the Georgia Institute of Technology in Atlanta, Ga.

In 1992, Jenkins came to Ames to work for the SETI Institute in Mountain View, Calif. He began work with an international group of astronomers and he caught the attention of Bill Borucki. Jenkins experienced many changes in 1995. In May of that year, he joined the Kepler team and married his wife, Renée Schell. Currently, Jenkins is anxiously awaiting the Kepler launch and the moment where data from the Kepler spacecraft will be analyzed. "All of the magic will happen in the data processing facility. That is where pixels will turn into planets," said Jenkins. "It's like getting new prescription glasses. We'll get to see things we have never seen before."

The Kepler mission is an exciting mission where the science and technology will be done at NASA's Ames Research Center. The mission will search for habitable planets in our Milky Way. "I'm very happy to be working on Kepler. If I didn't find the science behind Kepler so exciting, I don't think I would have dedicated so much time and energy to this mission. It has been my sustaining motivation to work long and hard," said Jenkins.

Jenkins and his team, many of whom are amateur astronomers themselves, are the "dream team" of data analysis. This team is well aware that some of the calibrations and data processing algorithms may have to be altered as the mission progresses. "We are prepared to make changes in the data analysis based on what information we are receiving. Nature sometimes surprises you," said Jenkins.

The Kepler mission will record brightness measurements from the stars in a section of the Milky Way galaxy. The team will look for a dimming of light that happens repeatedly over evenly spaced periods of time, which could signify a planet orbiting around a distant star. Jenkins believes that it would be surprising not to find Earth-sized planets, although he admits that not finding any planets is meaningful as well.

Jenkins recognizes that he is very dedicated to the Kepler mission. "In almost everything I do, I am very focused – somewhat obsessive. The fun for me in doing something is doing it well – taking my ideas, implementing them and improving upon them." Jenkins understands this urge to work on something and make it perfect. Jenkins was part of the original proposal team for Kepler, and has been helping to make this mission perfect for the past 14 years.