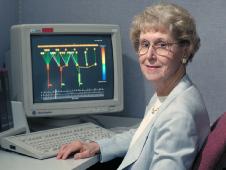 Conceived and developed at the Center of Bioinformatics at Ames, a design team lead by Muriel Ross, developed the 'virtual clinic'. Photo Credit: NASA 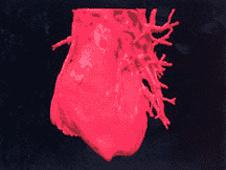 Physicians rotated 3-D images to view from different perspectives, while other participants watched the same display and offered differing opinions. Photo Credit: NASA What do a Navajo grandmother and a NASA astronaut have in common? Both live in desolate, remote places, either in the New Mexico desert or aboard the International Space Station, and both will have difficulty getting medical treatment or transportation to a hospital if needed.

NASA early on realized that there may be times when astronauts get into trouble and require emergency medical assistance, whether they are traveling in space, or living on the International Space Station. To solve this problem, NASA's Ames Research Center developed a "virtual clinic" 10 years ago that has been helping underserved populations in some of the most remote places on Earth.

Celebrating its tenth anniversary this month, this "virtual clinic," called the Virtual Collaborative Clinic (VCC), has been providing advanced medical breakthroughs since its inception. When Ames developed this highly sophisticated "telemedicine," it was a giant leap forward for health care.

"At a time when virtual presence was only a dream, innovative thinkers at Ames demonstrated that people from various site locations could work together in real time, share expertise, information and skills to improve health care delivery for communities in some of the most remote areas in the world," said Steve Zornetzer, Associate Center Director and the former Director of Information Technology at Ames.

Conceived and developed at the Center of Bioinformatics at Ames, a design team lead by Muriel Ross, developed three software tools to help diagnose and plan medical treatment in the most hostile environments. These tools combine advanced medical imaging with high-performance, high-speed networking to give doctors three-dimensional, high resolution, color images from a desktop station in real time.

Once these images are made, a second software tool, called "CyberScalpel," allows physicians, administrators and technicians at different locations to view and evaluate the patient's problem or injury and discuss the best medical procedure for treatment. By rotating and manipulating the image, physicians can practice surgical procedures in a virtual environment, reducing the time needed for surgery and potentially improving surgical outcomes.

Physicians can cut into virtual images and even remove tissue or bone. Sessions are collaborative; any participant, whether local or distant, can rotate the image to view it from different perspectives, while other participants watch the same display and offer differing opinions for a truly interactive atmosphere.

The third tool is a multicasting application that enables simultaneous sharing of information at various sites. The software regulates information received and sent from routers, by minimizing transmission delays to deliver data in near-real time, synchronizing large, 3D image displays at end sites, and accommodating satellite/ terrestrial networks on disparate platforms. To solve these problems, Cisco Systems contributed the design of the multicast internet software.

In addition, for the interactions among sites to be successful, the network system needed bandwidth, scalability, reliability, and multicasting capabilities. NASA needed an end-to-end IP-based network solution. These networks --- the NASA Research and Education Network (NREN), the National Science Foundation's Very High Performance Backbone Network Service (vBNS), Abilene, and the California Research and Education Network (CalREN2) – connected the participating sites with the application server at Ames.

With all systems ready, the VCC was launched on May 4, 1999. For the first time in history, medical experts from five sites had the opportunity to discuss actual cases while viewing specific complex visualizations for surgery in real time. Using ground link and satellite transmissions through the VCC, doctors discussed cases and, in one instance, performed virtual surgery. On the day of the demonstration, UC Santa Cruz also set up an auditorium on site for anyone to observe what was happening in the Virtual Collaborative Clinic.

The Cleveland Clinic team discussed a case where the patient suffered from an enlarged heart. The Salinas site treated an infant's arrhythmic heart and results of cardiac surgery were presented by the Navajo, Cleveland and Salinas hospitals.

"Dr. Muriel Ross and her partners in the private sector, the health industry and private clinics, conceived, implemented and demonstrated the utility of the Virtual Collaborative Clinic," said Zornetzer. "NASA is known for its leading edge technical capabilities, and the VCC project demonstrated, over a decade ago, what is only today becoming more of a reality."

Today VCC is used for tooth autotransplantation, and to correct cleft palates, facial reconstructive surgery, and hip reconstruction. Michael Stephanides, a research physician at Stanford University Medical Center, recalls three projects that were spawned from the 1999 virtual clinic. The projects included software for a surgery to rebuild a woman's face (nose and cheek); a microsurgery training simulator which resulted in a prototype; and a 3D measuring tool that created jaws out of leg bones for cancer patients.

"Advances in computing over the last ten years have rapidly improved imaging and simulation in healthcare. At Stanford, we were able to develop a simulation system for craniofacial surgical planning. This technology is a significant advantage in surgical planning and education, both of which can improve patient safety and outcomes," said Dr. Stephen A. Schendel, a former researcher at the Stanford University Medical Center in California.

Doctors say simulated surgeries save time and improve surgeries, and the VCC allows them to perform simulated surgical procedures. NASA's long-term goal for the VCC is to ensure the health of astronauts as they probe deeper into space. But the clinic's advanced network technologies also will help make "universal" health care a reality, by offering the same quality health care to patients in outlying areas as those who are treated in large, well-known institutions.

The medical professionals involved in the Virtual Collaborative Clinic would like to acknowledge the contributions made by Bruce Finke, MD and Mark Carroll, MD from the Indian Health Service. Ruth Dasso Marlaire
Ames Research Center, Moffett Field, Calif.
› Back To Top