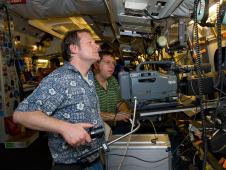 To observe the fiery re-entry, a team of scientists took off from Tahiti, French Polynesia, onboard two aircraft: NASA's DC-8 airborne laboratory and a Gulfstream V jet. Both aircraft flew southwest to the re-entry site above the Pacific Ocean.

The aircraft were loaded with a variety of cameras and sensors capable of imaging the event in the visible, infrared and ultraviolet wavelengths of light, as well as gathering spectroscopic data.

The following video is a behind-the-scenes look at the last-minute preparations and a few results of the team's observations.

› Play Video Now
› Back To Top