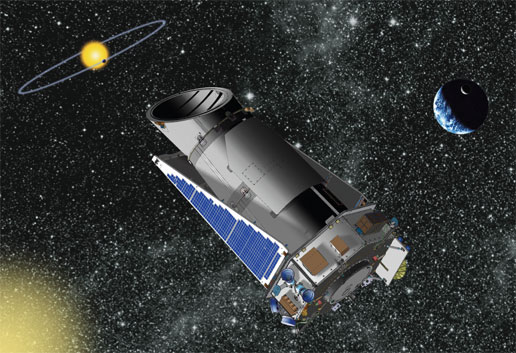 ... NASA's first mission capable of finding Earth-size and smaller planets around other stars.

The centuries-old quest for other worlds like our Earth has been rejuvenated by the intense excitement and popular interest surrounding the discovery of giant planets like Jupiter orbiting stars beyond our solar system. With the exception of the pulsar planets, all of the extrasolar planets detected so far are gas giants, approximately 150 as of 2005. The challenge now is to find terrestrial planets (habitable planets like Earth), which are 30 to 600 times less massive than Jupiter.

The Kepler Mission, a NASA Discovery mission, is specifically designed to survey our region of the Milky Way galaxy to detect and characterize hundreds of Earth-size and smaller planets in or near the habitable zone. The habitable zone encompasses the distances from a star where liquid water can exist on a planet's surface.

Results from this mission will allow us to place our solar system within the continuum of planetary systems in the Galaxy.