Comet Research
The solar system has four rocky inner planets and four large gas giant outer planets. The planet Pluto is still a mystery. In addition, there are other "small bodies" in the solar system. Comets make up a portion of those small bodies and contain a large percentage of ice since they come from a very cold area. Scientists aren’t sure whether comets are more like snowy dirtballs or dirty snowballs depending on the amount of rocky debris mixed with the icy material. Comets seem to be found in two places: some far beyond the edge of the solar system called the Oort Cloud, and some beyond Neptune in a region called the Kuiper Belt. The Oort Cloud may contain a trillion icy comets. The Kuiper Belt comets replenish the population of short period comets. 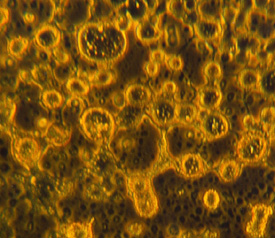 Image right: The actual vesicles that are formed in experiments that simulate cometary ice chemical processing. By simply exposing a realistic cometary ice analog ice made of the simplest things-water, ammonia, methanol and carbon monoxide to UV light, much more complex molecules are formed. When they are added to water, as shown in the graphic, structures that look like bacterial colonies are spontaneously formed by some of the new molecules that were made. This behavior derives from the new molecules that are made from these simple starting ices under deep space conditions and are likely brought to habitable planets by comets and cometary pieces. Image courtesy: NASA. Comets may be an important part of the recipe for making planets and may be material left over from solar system formation. Some comets may have crashed into forming planets adding to their water and rock while other comets escaped to establish their own orbit around the sun. The orbits of planets line up primarily on one plane like rings on a target. Comet orbits can be different from that of planets. They may arrive in the inner solar system from "above" or "below" the plane of the planets and they travel very far from the Sun. Sometimes, there is a stirring in the Oort Cloud, possibly from the gravity of nearby stars or dark matter bodies that pass through the cloud. That stirring can cause a comet to head from the Oort Cloud into the inner solar system. The earliest observers to notice comets in the sky could only learn from looking up just like a person looks at a picture of a comet in a book. Later, observers began to notice that comets moved from night to night in the sky. Using what they knew about math, they were able to begin tracking comet orbits. As technologies were developed, scientists could begin observing in a new way to discover the makeup of these icy bodies. Comets may have within them the last pristine clues to the beginning of the formation of the solar system. Some believe that comets may have brought water to earth through impacts. As gas and dust swirled around the condensed Sun, molecules came together forming compounds. Water and carbon dioxide are two examples of volatiles/ices while olivine and CH-O-N molecules are dust or refractory compounds. Gravity brings the molecules together in clumps that eventually grow to larger and larger cometesimals. Rather than a solid ice cube, comets may be made of many smaller ice crystals with other organic molecules mixed in. For more information associated with the past, present, and future of Comet research at NASA Ames Research Center, click on the corresponding images: PAST RESEARCH PRESENT RESEARCH NASA Ames contributions to NASA's Deep Impact mission: FUTURE RESEARCH To view a computer animation of the mission, please visit:

To view a video of the comet burst, please visit:

To visit the Deep Imact homepage on the NASA portal, please visit: