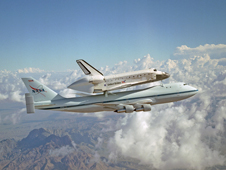 Photo Credit: NASA Because of the historic contributions to the shuttle program by NASA's Ames Research Center, space shuttle Endeavour will be flying over Ames on the morning of Sept. 21, 2012. Media can contact Jessica Culler to RSVP at 650-604-4789. More resources will be added to this page as available.


Videos: Imagery: List of Major Ames Contributions:
› Back To Top