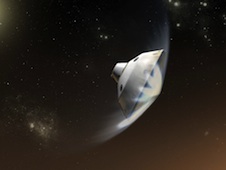 This artist's concept depicts the interaction of the MSL spacecraft with the upper atmosphere of Mars during the entry, descent and landing of the Curiosity rover onto the Martian surface.

NASA's Mars Science Laboratory (MSL) spacecraft with the Curiosity rover is scheduled to arrive at Mars Aug. 5, 2012. Curiosity will search for evidence about whether Mars had environments and chemical ingredients favorable for microbial life. Ames is contributing to this exciting mission in a variety of ways, including:

Ames is the lead for the Chemical and Mineralogy (CheMin) instrument that will identify and quantify the minerals in Martian rocks and soils.
Ames also will support other science instruments on Curiosity, including:

ChemCam is a rock-zapping laser instrument that observes the resulting flash through a telescope to identify the chemical elements in the target.

The Sample Analysis at Mars (SAM)

The SAM instrument has three laboratory tools for analyzing gases pulled from rocks and soil samples, as well as from the Martian atmosphere.

REMS will provide daily weather reports from the Red Planet using a suite of meteorological instruments.

Researchers invented the unique thermal protection system consisting of tiles made of Phenolic Impregnated Carbon Ablator (PICA) that the MSL spacecraft will use to safely reach the surface of the Red Planet.

The MSL heat shield was tested at Ames’ Arc Jet Complex, which reproduces heating and pressure conditions similar to those experienced by spacecraft during atmospheric re-entry.

Engineers developed the Mars Science InterfaCE (MSLICE) software tool in collaboration with engineers at NASA's Jet Propulsion Laboratory to plan the actions of the Mars rover and maximize scientific research.