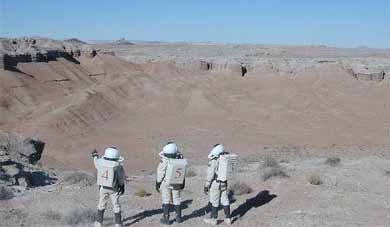 Who are these hardy souls? The four crews are made up of a commander and a mixed group of graduate students, undergraduates, recent graduates and a middle school teacher from around the globe. Crewmembers come from the United States a well as Canada, Greece, Puerto Rico and Switzerland.

As with any research mission, a significant portion of the work is done before the expedition. Each crew is responsible for developing their research assignments and determining what equipment is necessary during their mission. During their 12 to 15 hour days, the crews will conduct research in geology, microbiology and crewmember physiology, as well as field-testing of new EVA hardware, rigging data loggers, and performing work-study task and procedure analysis.

Why would they want to go through such an ordeal? For the science! Also, for a chance to do what people have dreamed about for centuries, exploring Mars in person. Well, its not the real thing but it is the closest you can get to actually being there, for now. 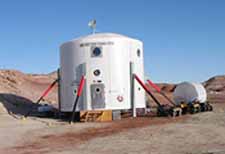 Why is NASA involved? Humans are curious creatures always seeking out the unknown and the moon and Mars are close but so far away. These types of activities help NASA understand what is needed for a human moon or Mars missions.

The Spaceward Bound project, in partnership with The Mars Society and funded by the NASA Exploration Mission Directorate, focuses on helping train the next generation of space explorers. The project does this by having students and teachers participate in the exploration of scientifically interesting but remote and extreme environments on Earth since they have many of the similar conditions that will be encountered on real missions.