The Planetary Aeolian Laboratory (PAL) is a unique facility used for conducting experiments and simulations of aeolian processes (windblown particles) under different planetary atmospheric environments, including Earth, Mars, and Venus.

Benefit
The Planetary Aeolian Laboratory (PAL) includes research appropriate for Mars at one of the world’s largest chambers for conducting experiments at low atmospheric pressure. In addition to aeolian research and the testing and calibration of spacecraft instruments, the facility is a valuable resource for scientists and engineers who require a large, low-pressure (5.5 mb) environment. 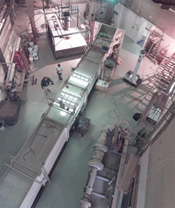 Research Overview
For the past thirty years research has been conducted on various aspects of planetary aeolian processes, including assessment of wind speeds needed to initiate the movement of particles on Earth, Mars, and Venus, rates of wind erosion, and analysis of various “bedforms” such as ripples. The results have been used to interpret spacecraft data returned from orbit and the surfaces of Mars and Venus. Although the primary focus is on extraterrestrial processes, the results also have application to understanding aeolian processes on Earth, including problems of desertification. Located in Building N-242, the facility consists of the environmental test-chamber and a control room/office. The chamber has an inside height of 30 meters and an inside volume of 4000 cubic meters. PAL draws its vacuum from the Thermal Physics Facilities’ Steam Vacuum System and can be evacuated to 5.5 millibar in about 45 minutes. To help defray the cost of running the Steam Vacuum System an agreement was struck in which PAL draws its vacuum only as a “ride-along” with other facilities. The Martian Surface Wind Tunnel (MARSWIT) was put into operation in 1976. It is an open-circuit 1.3 by 1.3 by 13 m atmospheric boundary-layer wind tunnel capable of simulating aeolian processes under both martian and terrestrial conditions, operating at atmospheric pressures ranging from 1 bar to 5.5 millibar.

MARSWIT is used to investigate the physics of particle entrainment by the wind under terrestrial and Martian conditions, conduct flow-field modeling experiments to assess wind erosion and deposition on scales ranging from small rocks to landforms (scaled) such as craters, and to test spacecraft instruments and other components under Martian atmospheric conditions.

Differential pressure transducers (Setra 239) are used for measuring free-stream wind velocities and deriving wind profiles. These have a range of +/- 1.25 millibar. A Vaisala dewpoint and temperature transmitter is used to monitor the temperature and relative humidity within the chamber. One Setra 204 0-1034 millibar transducer and one MKS Baratron 127AA 0-13 millibar transducer are used for measuring Earth (1 bar), and Martian (~7 mbar) chamber pressures respectively. The chamber is equipped with 24 type T thermocouples for measuring temperature. During experiments for particle threshold and flux, particle movement is determined by charged particles hitting an electrometer plate in the wind tunnel and measured on a Keithley 602 Solid State Electrometer.

The PAL is equipped with a high-speed (500k samples/s) analog-to-digital data acquisition system from National Instruments, Inc. Running on a PC, the system is capable of simultaneously measuring 64 analog channels, which can be independently accessed. The system is controlled by the National Instruments software package LabView. This system allows for realtime acquisition, analysis, and visualization of wind tunnel temperature, pressure, velocity, and electrometer probe data. Other analog and digital instruments can be incorporated for specific experiment requirements. Current work at the facility includes research on the particle physics and geology of dust devils (coordinated with field studies of dust devils on Earth), analysis of the formation of wind-abraded rocks (ventifacts), and the development and testing of flight hardware for future spacecraft on Mars.

Background
In the early 1970s, a series of simple wind tunnel experiments was conducted at NASA-Ames to gain insight into the nature of aeolian activity as a planetary process. Initial results were promising and provided clues into the nature of Mars wind streaks seen on Mariner 9 images. A successful proposal was submitted to NASA Headquarters to establish a facility capable of conducting experiments dealing with the physics and geology of Martian aeolian features and processes. In 1977 an agreement was reached among NASA Headquarters, Ames Research Center, and Arizona State University (ASU) that enabled continued operation of the facility through ASU. The Facility is currently administered by the NASA-Ames Thermal Physics Facilities Branch and is operated by ASU personnel.