Benefit
Current DNA sequencing and identification technologies are impractical for both technological and financial reasons to enable sequencing and functional analysis of the genetic biodiversity of the Earth’s ecosystem and for sequencing all human individuals. Such sequence information would at minimum enable 1) identification of the genetic basis of phenotypic variation for all living organisms (including all biohazards, such as bio-warfare microorganisms), and 2) identification of the genetic basis of all acquired and inherited human diseases and phenotypes. The NASA Ames Genome Research Facility provides genome technology resources to enable large-scale projects that will address fundamental principles of biology.

For example, NASA uses the microarray technology for identification of genetic variation and responses of model organisms to changes in environment, which may include microgravity studies on the International Space Station and longer duration missions to the Moon and Mars. 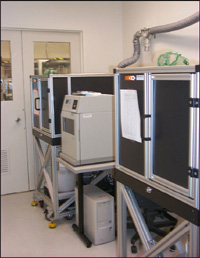 With the rapid accumulation of sequenced genomes and the development of technologies to analyze these DNA sequences, Genomics is emerging as an independent field of science. Technology development is central to Genome Science. In addition to development of faster and less expensive DNA sequencing technologies, advances in the ability to assay functionality of genes and proteins on a genome-wide scale have revolutionized the biological sciences. Future advances in Genomics will include DNA sequencing with speeds that are orders of magnitudes beyond our current capabilities, development of technologies to probe the functions of entire genomes rapidly and with high accuracy, development of computational approaches for analyzing and modeling complex biological systems, and development of technologies to engineer genomes and organisms through gene and chromosome synthesis. Some of the most exciting advances in Genome Science can be realized through collaborative interactions among institutions with complementary expertise, and under programs that stimulate intellectual and technical exchange. Interdisciplinary scientists at the NASA Ames Genome Research Facility currently collaborate with academic centers of excellence such as Baylor College of Medicine, Stanford University, University of California, University of Wisconsin-Madison, and Yale University; see http://phenomorph.arc.nasa.gov/collaborators.php.

For example, high-density DNA oligonucleotide microarrays with up to 400,000 probe sequences per array that represent tiling throughout genomes of various model organisms were computationally designed and produced using NASA Ames super-computer SGI 3000 and a Maskless photolithography method. These novel arrays were used for functional annotation of genomes from various model organisms by identification of the complete set of expressed sequences in the entire non-repetitive genomes. This approach confirmed thousands of gene predictions and revealed a much more diverse set of expressed sequences than was computationally predicted to be encoded in the genomes of model organisms such as fruit fly Drosophila melanogaster, plant Arabidopsis thaliana and in human cells. The NASA Ames Genome Research Facility is funded by the Office of Biological and Physical Research (OBPR), the Defense Advanced Research Projects Agency (DARPA), and Center for Nanotechnology.

Background
NASA Ames Genome Research Facility was established in 2003 by the Fundamental Biology Program and the Center for Nanotechnology. The Facility is designed to support NASA research needs in genomics and nanotechnology, and to advance research objectives in bio-sensor technology development through collaborative projects with academic and industry partners.