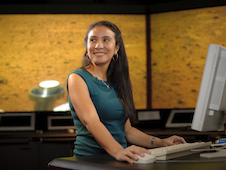 Jessica Marquez
Photo Credit: NASA Ames Research Center / Eric James
Born and raised in Lima, Peru, Jessica Marquez traveled to the United States in 1995 to begin her undergraduate degree at Princeton University, New Jersey. Upon graduation, she received a bachelor of science in engineering from the Department of Mechanical and Aerospace Engineering.

As an undergraduate, she first learned about NASA while attending the NASA Academy, an intensive summer project for highly motivated and successful undergraduate and graduate students. She spent a summer at NASA’s Ames Research Center, Moffett Field, Calif., conducting atmospheric science research and learning about NASA as an agency and its multi-faceted missions.

In 1999, she moved to Boston, Mass., where she started her graduate studies at Massachusetts Institute of Technology (MIT), Cambridge. While at MIT, she specialized in decision-support systems for lunar and planetary exploration. She received a master's degree in aeronautics and astronautics and later a Ph.D. in human systems engineering

Today, Marquez is a research engineer in the Human System Integration Division at Ames. As a researcher, she develops tools for people who support human space exploration, including trainers, flight controllers, and astronauts. She previously supported the Constellation Program, a human spaceflight program now discontinued, and International Space Station programs.

Her passion is space exploration. Her research focus is human spaceflight, or robotic exploration of our solar system. Whenever she can, she talks to students of all ages about space and exploration.

She enjoys traveling, softball, rock climbing, hiking, movies, and eating different kinds of foods from around the world.