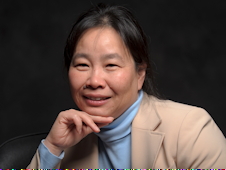 Huy Tran
Photo Credit: NASA If you had asked, in 1969, what the probability would be of me someday working at NASA, I would have told you that it would be infinitely small. Let me tell you why.

I was born and raised in a war-ravaged country called Vietnam. The first moon landing and the first successful return of the space shuttle both served as my inspiration to pursue the fields of math and science and ignited my desire to join the NASA workforce. However, unlike most of you, I did not watch the moon landing from the comfort of a living room. Instead, I peeked through a hole in a roof while dangling from a mango tree branch 3 or 4 meters above the ground. I grew up in a very small village in the southern tip of Vietnam—about 60 kilometers from the tip of the South China Sea, and about 350 kilometers from Saigon. My family lived in a small hut near the riverfront. Across the river was the known gathering place for the Viet Cong. My dad’s Navy unit was based at least 10 kilometers outside of the main town. Electricity was reserved for the few elite and high-ranking officers. The commander’s house was blessed with a 9-inch black-and-white television that his wife had brought from their hometown of Saigon. During the weekend nights, the lady of house allowed the soldiers’ children to gather on her front porch and watch a few hours of television—re-broadcasts of war news, music shows, and the original Star Trek series. For weeks, we had heard about the Americans sending a man to the moon, and we were all very excited to see the footage. There was a large crowd in front of the porch and, being 6 years old, I wasn’t able to get a good view of the television. So I sneaked around the back of the house and climbed the mango tree where I could part the palm roof panel just enough to see the television screen. What I saw was incredible—a man was on the moon in his suit, alien looking. I thought about how nice it would be to go to the moon someday. I watched the people in the control room celebrate and wished that I could be one of them. If you had asked any statisticians about the probability that I would achieve that dream, they probably would have told you that it was infinitely small—or next to zero.

As the war intensified, I stayed busy with daily activities and with trying to survive the war, so I had put my dream on hold. However, every once in a while, when I had a moment to look at the moon at night, I wondered if I would ever make it up there! At that point, it was a dream, and only a dream. Then in April 1975, with the fall of Saigon, my plan of going college became less probable and my dream was further out of reach. After 4 years under the communist regime, and after endless days and nights of living in fear, my parents decided to take on the highly fortified checkpoints and South China Sea, and we escaped Vietnam via boat.

We spent a year in the refugee camps in Indonesia and were sponsored by a group from the Lutheran Church in Woonsocket, South Dakota. We arrived in the United States on March 31, 1980. Our first year in this new country was quite dramatic. We moved from South Dakota to the Bay Area in July. I worked as a dishwasher in my dad’s friend’s restaurant to earn the privilege to live in their San Francisco basement. My mom served as their housemaid. When school started. my parents wanted all of the children to attend, so we moved to Sunnyvale, California, and stayed with my dad’s old business partner in a two-bedroom apartment. I had self-learned English during our stay in the refugee camp, and I became responsible for making sure all eight of my younger siblings attended school and did well. I was a senior at Sunnyvale High School and graduated with a diploma. As I watched the successful launch and landing of the first space shuttle, Columbia, on April 12, 1981, my dream of working in space came back to life. At the time, I was not sure how I would get there, but I did know that it was possible. While at De Anza College, I applied and got accepted to the Foothill-De Anza one-year internship program at NASA in 1982. I worked in the thermal protection material laboratory where NASA was doing research on improvement of the space shuttle tiles. I was very excited and nervous during my first day at work for NASA. I spoke broken English. Thankfully, my mentor and supervisor they made me feel right at home. I was fortunate that I was allow to work in the laboratories, learning how to make tiles, heating them up to 3,000°F in various furnaces, and testing their strength. I kept thinking how lucky I was to be able to work at NASA. I took this opportunity very seriously. I put in extra hours during the early mornings to learn how to operate all of the equipment safety and properly. I wrote test reports with graphs and data analysis, which had never been done by an intern. My supervisor was so impressed with my ability to do laboratory work and trending data, he shared my reports with the entire branch. I continued to work for different researchers in the branch after completing my internship, and I carried out my line of research while earning my Bachelor of Science in materials engineering at San Jose State University.

The first happiest moment of my career was when the Mars Pathfinder Sojourner rover sent home the first picture of Mars on July 4, 1997. I was the lead engineer for testing and verification of the heat shield that protected the rover and its payload through the 6 minutes of terror during its entry into the Mars’ atmosphere. Once the rover sent home the first picture, our entry, descent, and landing team celebrated with a roar. We did our job! I had two reasons to celebrate: our team designed, built, and qualified the heat shield, and it performed beautifully; and I had invented the back interface plate where the Mars Pathfinder and the mother spacecraft were protected by the material. I realize how lucky I am. I know people who have worked their entire career in a similar field and did not have a single chance to fly their invention, and I got to fly mine successfully at age 33, and on the first mission back Mars since 1976.

My second happiest moment—and probably the proudest moment of my life—was when Stardust Return Capsule landed safety in the Utah range on January 15, 2006. Stardust was the first NASA sample return mission from a comet. It was an affirming moment of my career. I remember that I cried the entire 2 minutes of watching the capsule enter Earth’s atmosphere at the fiercest speed. This affirmed my efforts because I finally felt that I had the right stuff, and that I had made a significant contribution to the space program. The heat shield that protected the comet sample canister was my invention and was built by my team.

I have definitely achieved my childhood dream. However, it was not so festive in December 1999 when the two Mars Deep Space II microprobes failed to send their signals back to Earth after entry. That was the saddest moment in my career. When you work on a flight mission, you live and breathe it. We had named the two probes “Scott” and “Amundsen” after the South Pole explorers. Our probes were designed to impact and penetrate the Mars polar surface and determine whether there was any ice below the surface. Even though our probes were the secondary payloads of the main Mars98 mission, this failure made me pause to reevaluate my engineering work for the next mission. I also learned that, although sending things to Mars is difficult and fast-paced projects cause people to cut corners, engineering due diligence and team communication are essential for mission success.

I was blessed to have had many excellent mentors throughout my career at NASA. During my internship, my first mentor taught me a great deal about critical thinking and systematic research. For me, hands-on experience was as valuable as the education I received during my college years. One day, after months of doing research in a set of material compositions, I ran the tests and the samples failed miserably. I was frustrated that I had wasted so much time and funding. My mentor sat me down and told me, “This is research. Sometimes things work and sometimes they don’t. And you just need to understand what your results tell you and then you move on. If you get it right the first time, then we would have to call it ‘search’ rather than ‘re-search’!” I thought it was funny at the time, yet his comment helped me to be patient, focused, and helped me learn to be a better researcher.

Biography
While Neil Armstrong was taking his first steps on the surface of the moon, a 6-year-old girl named Huy Tran was climbing a tree. She wanted to climb high enough to watch the historical event unfold through a part in the palm roof of someone else’s home in Vietnam, and she achieved that goal. At the time, no one—including Ms. Tran—could have guessed that she would someday be responsible for the development of technology such as advanced Air Traffic Management and alternate bio-fuel at NASA. Nor could anyone have predicted that she would be recognized, internationally, as an expert on advanced entry systems and thermal protection materials. But that’s exactly what happened…and much more. She also made significant contributions to flight hardware on seven NASA missions and was lead inventor of the Phenolic Impregnated Carbon Ablator. Even though she achieved those first successful steps through hard work and determination, she credits others for helping her climb high enough to reach her dreams. “I was blessed to have had many excellent mentors throughout my career at NASA,” she said. Ms. Tran earned a BS in materials engineering from San Jose State University.

Watch a video about Huy Tran.
› Back To Top