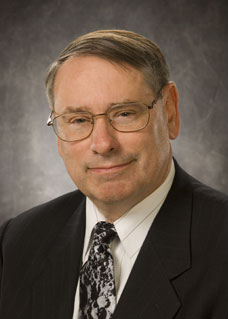 Worden has also put Ames on the critical path for all major NASA space exploration missions through effective use of the center’s unique wind tunnels, arc jets, intelligent systems and supercomputer facilities and capabilities. Worden’s ‘GreenSpace’ initiative has brought Ames’ remote sensing capabilities to bear on air traffic safety, fighting forest fires, and the study of climate change. And Ames’ new Sustainability Base facility will serve as a model for future eco-friendly, high-performance federal buildings. In recognition of these outstanding achievements, Worden was named the Federal Laboratory Consortium’s Laboratory Director of the Year for 2009.

Prior to becoming Ames’ director, Worden was a Research Professor of Astronomy, Optical Sciences and Planetary Sciences at the University of Arizona where his primary research direction was the development of large space optics for national security and scientific purposes and near-earth asteroids. Additionally, he worked on topics related to space exploration and solar-type activity in nearby stars. He is a recognized expert on space issues — both civil and military. He has authored or co-authored more than 150 scientific technical papers in astrophysics, space sciences, and strategic studies. Moreover, he served as a scientific co-investigator for two NASA space science missions.

In addition to his former position with the University of Arizona, Worden previously served as a consultant to the Defense Advanced Research Projects Agency (DARPA) on space-related issues. In 2004, he worked as a Congressional Fellow and chief advisor to the Chairman of the US Senate Subcommittee on Science and Space regarding NASA and space issues.