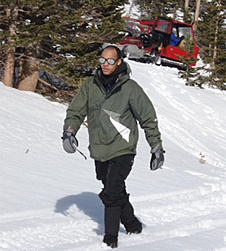 Getting dressed on a bitterly cold winter day is never easy. First put on the long-sleeved shirt. Then put on the sweater. On top of that goes the heavy jacket. Don't forget the gloves, boots, scarf, earmuffs and the hat.

Now, imagine preparing to go out on a cold day in Antarctica or Greenland, where temperatures are often well below minus 18 degrees Celsius (zero degrees Fahrenheit), and wind chills below minus 46 Celsius (minus 50 F). That’s bone-chilling cold, no matter how thick the sweater or heavy the jacket.

Despite the bitter chill, it's important for scientists to study the ice near Earth's poles. This ice is a critical part of the planet's climate. As global temperatures rise, polar ice is melting faster than expected. Scientists want to know why it is melting so fast, and what the impacts could be for the rest of the world.

Wouldn't it be great if scientists could stay warm while studying polar ice? Derrick Lampkin is doing what he can to help. Lampkin is a geography professor at Penn State University. With a grant from NASA, he's designing robotic rovers to help scientists study polar ice from the comfort of their laboratories.

Lampkin's rovers are small, suitcase-sized machines with instruments packed inside them. Researchers will be able to control the rovers remotely from anywhere in the world. They will scuttle to spots on the ice that are of specific interest to researchers. There, the rovers will measure atmospheric conditions as often, and for as long, as they are told.

Lampkin and other scientists want to know the answers to some vital questions about the ice: How much are the ice sheets shrinking? How fast is this change happening? Where is the ice melting the most? What factors are affecting this melt? What will melting ice do to global sea levels?

A major portion of the world's fresh water is locked within the thick ice sheets that cover Antarctica and Greenland. Scientists fear that melting ice could raise sea levels, affecting coastal areas around the world.

Disappearing ice could also speed up global warming. How so? Ice reflects some of the solar radiation that falls on the Earth. But as ice melts, the darker surfaces underneath absorb more energy from the sun, which could lead to faster warming. 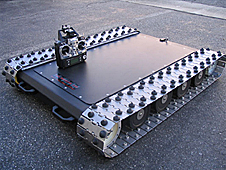 "Things like the direction of the wind, wind speeds, the temperature of the atmosphere can all influence the health of the ice sheet," Lampkin added.

The rovers will measure energy from the sun, air temperature, wind speed and wind direction. They'll also measure changes in atmospheric pressure. Right now, automatic weather stations collect this data. The stations are spread out all over Greenland and Antarctica. They are spaced far apart to span as much territory as possible. But sometimes there is a gap in coverage just where a scientist needs to measure local weather conditions.

The rovers will be an extension of the automatic weather stations, according to Lampkin. The key difference will be that "scientists would have much more control over where these devices go or how long and how often they monitor," he said.

In the future, Lampkin imagines rover stations scattered across icy expanses. The stations would act as home bases for the rovers and keep them charged. A scientist could then go online and command the rovers to go to a certain spot to take measurements.

"Teachers and students could also use the rovers for projects to study the ice sheet and how it is changing," Lampkin said.

The rovers are designed to withstand extreme cold and wind. The track system is designed to move over snow and ice. A shell will surround some of the instruments and protect them from wind and snow.

Lampkin and his students will soon be testing the rovers. They'll do this at an alpine research site near Denver, Colo., where conditions are very similar to the Antarctic. The rovers should then be ready to set out on their icy missions.

Lampkin's research is supported by a grant under NASA's Advanced Information Systems Technology program. Please visit http://education.nasa.gov/edprograms/fellowgrants/index.html for a complete list of NASA grants and fellowships.