Grow Text SizeShrink Text Size
Targeting NASA
The resumé of one of NASA's newest Mission Control Center operators is peppered with a variety of NASA student experiences -- student rocket projects, a summer research project at a NASA center and research in a reduced-gravity aircraft. 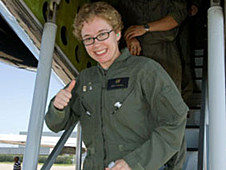 The Space Grant (experience) really just landed in my lap -- I showed up for school at the University of Alaska Fairbanks and discovered that UAF had the only university-owned sounding rocket launch facility in the world. It only makes sense that they also had a team of students building a rocket payload! I started as a student volunteer and ended up as the project manager during my senior year.

The NASA Academy came about as a result of online searching -- sometimes a Web search is the most productive! I strongly recommend this program to anyone interested in becoming a leader at NASA. The experience was invaluable.

Finally, I ended up flying with the Reduced Gravity Program through a friend who met one of the program coordinators during an internship at Johnson Space Center. Networking was the key in that situation. 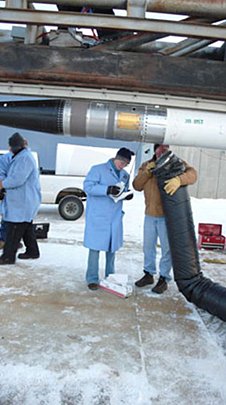 Tess Caswell is preparing the payload on the launch rail two days before launch, in ambient temperature of about minus 40 degrees Fahrenheit. Image Credit: Alaska Space Grant

Explain the research you conducted through your NASA involvement and why this topic is important.

As part of the Student Rocket Project, I helped build a rocket payload that flew almost 100 kilometers into the atmosphere (spanning the entire D-region of the ionosphere, if you want to know the details!). Along with four instruments built by students in Japan, the experiments on our payload mapped the geomagnetic properties of Earth at high-latitude. That is, we launched from a very northern range and measured properties such as the direction of Earth's magnetic field and the density of plasma in the atmosphere. The readings directly contributed to better understanding our Earth (and, incidentally, enhanced our engineering educations beyond all measure).

As a research associate with the NASA Academy I helped design a "zero-leak, one-time-actuated, normally closed valve" used in propulsion systems for unmanned spacecraft. Existing valves, which use explosives to open, were contaminating the propellant lines. The valve I worked on was a replacement that used shape-memory alloy to do the job. While getting rid of the explosive chemicals (which were contaminating the fuel lines), the system was also lighter and more compact. As an added bonus, taking explosives out of the picture made the valve safer to install and use.

What was the most exciting part of your research?

That's a hard question to answer! Launching our rocket payload in January 2009 was definitely exciting. Though I was in the blockhouse and didn't actually get to see the launch, I did hear and feel it through the walls of the bunker. Someone else described it as "dynamite going off outside." After that, watching the data come down and tracking the progress of the vehicle through the atmosphere was really cool -- all the way until it crashed into the ground at Mach 3, 50 miles away (it didn't have a parachute).

Equally exciting was flying on the NASA reduced-gravity aircraft. That's the "Weightless Wonder" that simulates zero-g, and the astronauts say it's the closest thing on Earth to actually being in space. We did real research (investigating an attitude control system for a CubeSat) while floating without gravity -- absolutely the coolest sensation ever! 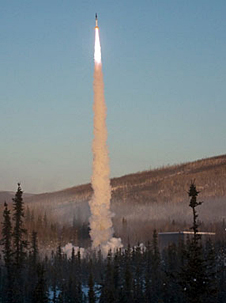 The Alaska Student Rocket Project at the University of Alaska Fairbanks launches student-built rockets from the only university-owned sounding rocket launch facility in the world. Image Credit: Alaska Space Grant

I have a bachelor's in mechanical engineering from the University of Alaska Fairbanks, with an emphasis on aerospace engineering and a minor in math. I plan to get a master's, and maybe a Ph.D., but I haven't yet decided what to pursue. I'm currently contemplating geology! In the meantime, though, I'm getting a "Master's in Space Station" through my training to work in mission control.

What inspired you to choose the career field you did?

My fifth-grade teacher had a wall-sized poster of a space shuttle orbiting Earth. I was fascinated by the image and recreated copies of it in paint during my free time. That same year a spokesman from NASA came to my school. I decided that I wanted to be an astronaut, and when I met astronaut Joe Allen a year later he told me that to achieve that dream I should become an engineer.

What do you think were the most important things you took away from your involvement with NASA?

Practical experience working on real spaceflight hardware. You can read about anything or churn out "theoretical" homework problems by the boatload, but putting your skills to the test by designing, building and flying a rocket payload (or a CubeSat prototype) teaches you things a classroom can't.

How has your NASA involvement affected your future?

My involvement in various NASA programs gave me a skill set that I couldn't gain in the classroom. When I applied for my first job, I was able to say that I'd designed and built spaceflight hardware with my own hands and that I'd gone through the rigorous verification process required to fly with a government program (flying on the Weightless Wonder required pages and pages of safety analysis to put our experiment on a government aircraft).

Through the NASA Academy I gained both hands-on research experience and a large base of leadership training, which prepared me for student and professional leadership roles. I also made a network of friends, which will last a lifetime.

What are you doing now?

I am in training to work in mission control for the International Space Station. I will be an "Operator" monitoring the Environmental and Thermal Operating Systems, ETHOS. Operators are the first level of mission control flight controllers -- after more training I will become a specialist and eventually may even become an instructor, teaching new flight controllers and astronauts about ETHOS systems.

An ETHOS operator monitors all of the hardware required to keep astronauts alive in space, as well as the regenerative life support system that recycles water and makes oxygen aboard the ISS. I will also be responsible for the internal thermal system, which controls the temperature of equipment such as computers and pumps inside the station.

What advice would you have for students who are interested in becoming involved with, or working for, NASA?

Be true to yourself, find something that you love and pursue it. NASA is such a huge organization, with so many facets, that you can satisfy almost any interest working in the space business. It's easier to work past the obstacles when you love what you do!