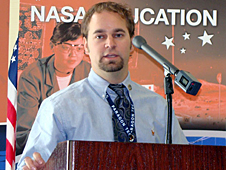 NASA's Graduate Student Researchers Program, GSRP, with Glenn Research Center in Cleveland, Ohio, currently funds my Ph.D. research (September 2007 - Current). My Ph.D. working title is "Lunar Dust Characterization, Abrasion Testing, and Impact Considerations for Spacecraft Design." I was a NASA Student Participant at the 2008 International Astronautical Congress in Glasgow, Scotland, U.K. Recently, I was inducted as a NASA Student Ambassador to participate in a virtual community, and I attended the STS-127 NASA Pre-launch Education Forum in Cape Canaveral, Fla.


Explain the research you conducted through your NASA involvement, and why this topic is important.

The moon is continuously being bombarded with micrometeorites, forming sharp dust particles. Since there is no weathering on the moon, the particles stay sharp and abrade materials that they come in contact with, such as spacesuits. The goals of my research are to help develop testing standards for abrasion research that will aid with material selection and a safe return to the moon. I hope that my research will aid in the mitigation of repeating issues encountered during the Apollo era.

The most exciting part of my research has been discussing dust issues with Apollo lunar astronauts. They have experienced the problems associated with dust firsthand and have insightful opinions on how future exploration should be conducted. I have also enjoyed being at NASA's Glenn Research Center during the summer working with brilliant people and collecting data in the lab.

I received my bachelor's degree in mechanical engineering from Queen's University in Kingston, Ontario (2002), my Master of Space Studies degree from the International Space University in Strasbourg, France (2003), and my Master of Science degree in aerospace engineering from The Pennsylvania State University (2005). I'm currently working on my Ph.D. at the University of Colorado at Boulder in Aerospace Engineering Sciences with a completion date targeted for May 2010. After graduation, I hope to work in the space industry and possibly return to academia later in my career as a professor. While working, I would like to take additional training courses in business development and management.


What inspired you to choose the education/career field you did?

I have always loved "the way things work" so I naturally went into engineering for my higher education. I have loved the idea of traveling to space since I was young, and I knew I wanted to be involved with the space industry. My education and work experiences so far have been focused on human spaceflight, and I will work hard to make sure I can stay involved in our future in space. Several experiences originally inspired me, including visiting NASA's Kennedy Space Center in Florida with my family and meeting Canadian Space Agency astronaut Julie Payette when she arrived in a helicopter at my junior high. 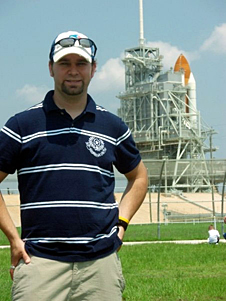 What do you think will be the most important things you’ll take away from your involvement with NASA?

The people I meet will be the best part of my NASA experience. They are the top scientists and engineers in the world, and I have learned a lot from them. The other students that I have interacted with at NASA events are very impressive and truly are our future leaders.

NASA has helped open new doors and given me an opportunity to pursue my dreams and contribute to the future of human space exploration. My experiences have been very positive and have harmonized with my academic and professional career.

If you have the passion for a certain subject, do what you can to absorb as much information as possible and look for opportunities to get involved. The more you put into your studies and research endeavors, the more you will get out of them.

As an Ambassador, I hope to help inform students about the opportunities that are available with NASA and to be a role model for students that have the same passion for space as I do.