Grow Text SizeShrink Text Size
Putting the Stars in Reach
While growing up, Devin Hahne was inspired by stories his father shared about aerospace corporations. Later, the Alaska Space Grant Program -- and a NASA internship -- taught him that he, too, could pursue a career in aerospace, and today he works for NASA designing scientific instruments that will lead to a better understanding of the universe. 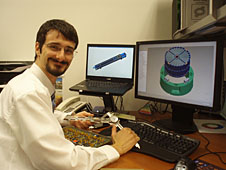 [I participated in] the NASA Student Internship Project (SIP) through the Goddard Office of Higher Education. I was offered this internship after submitting a flurry of applications. I remember spending three solid weeks rigorously filling out the applications. The reason was because there were many, many different projects and programs to apply for, and so it was quite laborious to fully exhaust all the options.

Explain the research you conducted through your NASA involvement and why this topic is important.

As an intern, I was shared between two NASA civil servants in the X-ray astrophysics (directorate). With my primary mentor, I was exploring new designs of X-ray mirrors, which are used in telescopes that study the X-ray energy bands. This was important because it was an effort to refine the predominant technology used to study X-ray astrophysics and improve the collection of science data. With my secondary mentor, I used a ... CAD (computer-aided design) tool to iterate the design of a proposed small explorer satellite. This satellite was going to use the aforementioned optics to research gravitational waves.

What was the most exciting part of your research?

I felt very privileged because I worked with people in a lab that had been initiated in the 1960s, and so they had a lot of heritage and experience to share with me. Also, I participated in the genesis of a satellite mission and iterated its design concepts. My contributions ultimately motivated my mentors to offer me a full-time job!

I have a (Bachelor of Science) from the University of Alaska Fairbanks (UAF) in mechanical engineering with an emphasis in aerospace engineering. I also have a minor in mathematics. I aspire to pursue a master's degree, but I'm not totally decided in what -- I have too many interests. I suffer from having too many ambitions but not enough time/money/energy. Topics that I'm particularly interested in include guidance, navigation and control; unmanned aerial vehicles; attitude control systems; modeling and simulation; and broadening my scope as a design engineer.

What inspired you to choose the career field you did?

I have to answer this with three major points, and not necessarily in this order.

One: The Alaska Space Grant Program ... was the incubator and the motivator of my career. I didn't even know what an engineer was when I started college in 2003! However, at a high school college fair, I was introduced to the ASGP rocket project at UAF and decided that I wanted to participate in that. I was blessed to work with some very bright and motivated friends, whose own enthusiasm inspired me to pursue space.

Two: Looking back, I spent a lot of time playing with LEGOs (LEGO building blocks).

Three: I was born in southern California, grew up in Alaska and spent every summer in California. Southern California was a major area for the booming aerospace industry in the 1980s! In fact, a boulevard near where I was born -- appropriately named Aviation Boulevard -- hosts several of the major aerospace companies: Lockheed Martin, Northrop Grumman, Boeing, Raytheon, The Aerospace Corporation, Hughes Aircraft, etc. Since I was very young, my father would show me newspaper articles of how these nearby companies were regularly making headlines!

What do you think were the most important things you took away from your involvement with NASA?

Scientists are real human beings with lives and bills and families and problems and joys, just like all other human beings. NASA is not some mysterious entity reserved for the highly privileged and exceptionally brilliant. It's inclusive and opportunities are available. Yes, being competitive in the aerospace industry requires diligence and high performance, but I suspect that many young people sell themselves short thinking that it's so far above them, so why bother. In fact, at an ASGP symposium I spoke at in May 2010, I asked the question, "Do Alaskans think NASA is unreachable?" I suspect a dilemma a lot of Alaskans in the rural areas face is a delusion that NASA is beyond them. Nonsense! I concede that if one doesn't have Internet, then filling out the internship application is a little tough, but UAF is working hard to make opportunities available to the rural villages.

How has your NASA involvement affected your future?

My internship in 2007 led to the full-time job I enjoy now. The experience and skills I've gained have broadened my horizons to include new aspects of engineering (the different flavors of engineer), science (the astrophysics is interesting, too), academia (what I might want to study in grad school), and how to professionally and personally interact with co-workers. Hopefully my involvement has been mutually and residually beneficial. On one hand, I benefited from the experience of those around me, and I was able to hone and refine my skills that make me a better engineer. On another hand, I was able to make a positive contribution to real science missions and in such a way that the scientists desired me to be a full-time team player. And on the third hand, I now have volumes of material to share with others -- hoping that some young person would also be inspired, and perpetuate other young minds to tackle greater challenges. As JFK said in his speech at Rice University, "We choose to go to the moon ... because that goal will serve to organize and measure the best of our talents and skills ..."

What are you doing now?

I am very blessed by my job! I never dreamed how much fun being an engineer would be! I'm a design engineer, pampered by sophisticated computer-aided design (CAD) software -- I say that to give homage to how design engineers did their work in the past: with drafting equipment and eraser shavings.

I work on three projects:

Astro-H/Soft X-ray Telescope (SXT): This is a satellite-based X-ray observatory. I was tasked to design the SXT mirror, which means that I made solid models of the hardware and helped with manufacturing drawings. Mostly, though, I am a liaison between the scientists and engineers -- my role is to translate the needs of the scientists into the language of the engineers. I iterate design ideas through CAD models allowing the team to address and solve problems. This project has international partnership, which allows me to interact with colleagues on the other side of the globe.

The X-ray Advanced Concepts Testbed (XACT): This is a sounding rocket mission which will be a proving ground for technology which will open new fields of X-ray astrophysics: X-ray polarimetry. I was tasked with the responsibility of the mechanical design of the whole payload. Thus, I modeled the optical bench, mirror optics (much akin to the ones I worked on during my internship), and the supporting hardware (excepting the detectors, as we're using the ones from the GEMS mission). I generate CAD models and manufacturing drawings. I'm a liaison to the manufacturers, and also with the staff and NASA’s Wallops Flight Facility, which is the operations hub of all things sounding rocket (our ASGP rocket experienced integration & testing and flight operations with WFF, too!).

Super TIGER: This is a balloon payload that is studying cosmic charged particles. My role is to iterate design ideas and render them in CAD so that the team is able to address the various problems that arise. I also generate the manufacturing drawings so that the detectors can be built.

I should say that, as a design engineer, one of my biggest tasks is to define the interfaces. This means that I do tolerance analysis (using the ASME [American Society of Mechanical Engineers] standard for geometric dimensioning and tolerancing) to make sure that all parts will fit together properly.

What advice would you have for students who are interested in becoming involved with, or working for, NASA?

Get exposed to what opportunities are available! Maybe you were interested in plant biology in high school, but never knew that there was a field of study in astrobiology! Find something you're enthusiastic about and chase it! Be humble and appreciate the history, heritage, and experiences of the people and institutes with which/whom you affiliate, because this will allow you to expand your sense of wonder for the subject matter you’re pursuing.

Stimulate the generations that follow you. Even your neophyte experiences are grand in the eyes of a fifth-grader! Volunteer your time assisting with things like the FIRST LEGO League challenge and STEM (science, technology, engineering and mathematics) subjects and outreach. I have traveled with friends to give space talks and captivated the attention of elementary and middle school audiences -- this is very rewarding, and it's even more rewarding to hear, months later, that some fifth-grader was inspired by some comment you'd made.