Grow Text SizeShrink Text Size
One Goal in Mind
Kim Terrell has dedicated the last 16 years to one goal: working for NASA.

In 1992, the Chicago native was working as an administrative assistant and taking courses at a junior college. While inquiring about tuition assistance and scholarship programs, Terrell read a sentence that changed her life. 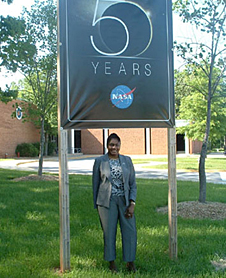 Kim Terrell has dedicated her education and her career to NASA missions. Image Credit: Kim Terrell

"I stumbled across a book that said aerospace engineers were the top-recruited majors out of school," Terrell recalled.

Terrell, who was already taking some computer programming classes in junior college, decided then and there that she wanted to work for NASA and write programs for aerospace applications. "When I got that idea, I had no idea where that was going to lead me," Terrell said.

About a year and a half later in December 1993, Terrell was planning a trip to Washington, D.C., and contacted NASA Headquarters to schedule a visit. She was encouraged to visit NASA's Goddard Space Flight Center in Greenbelt, Md., just 10 miles outside Washington, D.C.

While at Goddard, Terrell toured the center's facilities. She also met with scientists and engineers and with representatives from the center's education projects. She was given a list of NASA education opportunities, which she started applying for as soon as she returned home.

In 1994, Terrell was selected to participate in a Goddard student project and was awarded a financial grant through a NASA scholarship. That summer she worked alongside Goddard mentors in the High Performance Computing Community; in the fall, she used her scholarship to begin classes at the Illinois Institute of Technology.

"That was one of my most exciting summers," Terrell said. In addition to learning from her research, Terrell saw a space shuttle launch while she was gathering data and calibrating the rain gauges at NASA's Kennedy Space Center in Cape Canaveral, Fla. "Witnessing the launch of STS-71, the 100th manned spaceflight, was awe-inspiring and really exciting," she said.

For her third internship, she wrote a proposal requesting to help administer the summer internship program in which she would be participating. She and another student were selected to plan and co-manage the program. During that internship, she also supported the launch of NASA's Total Ozone Mapping Spectrometer. "I loved being able to see the behind-the-scenes spacecraft launch operations at Goddard," Terrell said. 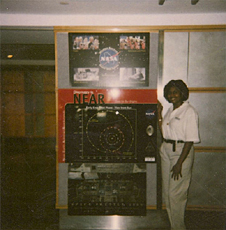 For her final summer as an undergrad at Goddard, she collaborated with the University of Maryland-Baltimore County's Regional Validation Center and her mentors at Goddard to create a systems engineering position. In that role, she developed the receiving station to receive and process data from NASA's Advanced Very High Resolution Radiometer, or AVHRR, mission.

She graduated from Illinois Institute of Technology in 1998 with a degree in computer engineering, specializing in software, and went to work for Sun Microsystems, a Silicon Valley computer company whose technologies are used in NASA missions. Terrell first worked in Sun's Chicago office. She was soon transferred to the Washington, D.C., office and assigned to work with Sun's NASA accounts.

"Working for Sun and in particular on the NASA account allowed me to sharpen both my business acumen and technical skills," Terrell recalled. "I really grew professionally by configuring, delivering and standing-by systems to ensure they met my customer's needs."

"We came to Strasbourg, France, from literally all over the world," Terrell said. "My class consisted of 50 civil space enthusiasts representing 19 different countries and nearly as many disciplines. At ISU, we examined the interrelations of space activities and issues relative to various perspectives, from just about every engineering background, information technology, and the physical and life sciences, to policy, law, business, finance and the humanities.

"For an 11-month program, it was really one of the best experiences of my career."

For the final module to complete the MSS degree requirements, Terrell returned to Goddard for one more internship, this time as a graduate student in Goddard's Stay-in-School Program, a temporary federal appointment. Her tasks included facilitating an enterprise architecture working group (made up of representatives from each the center's directorates), developing processes for the Chief Information Officer and the Outsourcing Desktop Initiative for NASA program manager, as well as supporting NASA Academy as a liaison to ISU. What started out as a summer internship was extended through the end of 2004.

After receiving her MSS degree and completing the appointment at Goddard, Terrell joined Futron Corporation, an aerospace services consulting firm, to manage the production of the monthly State of the Center report for Goddard's Office of Mission Success. Futron also tasked her with creating a risk-management training program to cross-train a group of engineers using NASA datasets.

In 2006, Terrell began the process of starting her own company, offering project management and systems integration consulting services. Katz International Management Solutions, or KIMS, is a woman- and minority-owned small business and is certified by the U.S. Small Business Administration.

Terrell said her education and career have been strategically focused to align with areas that are of importance to NASA. "Everything that I have done -- positioning my career within Sun, moving to Washington, D.C., attending ISU and now KIMS -- has been focused on supporting NASA," she said. "NASA invested in me. In turn, I have taken advantage of the opportunities they afforded and returned that investment to them in the form of high-quality work products. I am still enthralled by NASA’s mission and science, and continue to pursue more opportunities to work with and support NASA’s mission and objectives."