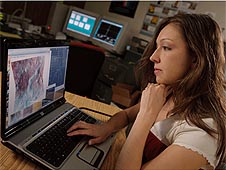 Student Ambassador Heather Makarewicz studies the geology and mineralogy of Mars as part of her research at NASA's Ames Research Center in California. Image Credit: NASA

As a child, it was my dream to work for NASA. To pursue this goal, I focused in math and engineering in college. During my junior year, I was searching for internships and discovered the NASA USRP (Undergraduate Student Research Project) project. I applied for the project, but did not get accepted. However, my husband was accepted into the project. I went with him and volunteered at NASA's Ames Research Center at Moffett Field, Calif., during his summer internship. While there, the education office recommended the UNCFSP-NSTI (United Negro College Fund Special Programs Corporation -- NASA Science and Technology Institute) project. I applied and was accepted for the summers of 2007 and 2008. During this time, I began a master's degree program and applied for fellowships with NASA. I wrote a proposal with my NASA mentor and received the NASA GSRP (Graduate Student Researchers Project) Fellowship. This will be the second year that I have received this award.


Explain the research you conducted through your NASA involvement, and why this topic is important.

My NASA group is conducting research on hyperspectral images obtained from CRISM (Compact Reconnaissance Imaging Spectrometer for Mars) that is on board the Mars Reconnaissance Orbiter. From these images, we can determine the geology and mineralogy of Mars. This will aid in the discovery of water and possible life on the planet. All of this information will be needed to colonize Mars in the future. However, we receive very large amounts of data from CRISM, which makes this a tedious task. It would take even a large group of people a very long time to process this information. Because of this, I am developing computer algorithms to automate this process. My work requires the development and automatic generation of mathematical models of mineral spectra. These models are used to automatically classify minerals and create mineral maps. The entire process is tested using known mineral spectra.

Thus far, the most exciting event of my research career was the 40th Lunar and Planetary Science Conference. During my poster presentation, I realized that many scientists in the field were very excited about my research. I began to feel like my research was going to make a difference in planetary science.

I started a general engineering degree from Olivet Nazarene University in 2003 but changed my major in 2006 to mathematics. I received my B.S. degree in mathematics in 2007. I received an M.A. degree in mathematics from the University of Kansas in 2009. I am currently doing a year of research at NASA's Ames Research Center. As I continue research at NASA, I will be investigating Ph.D. programs in applied mathematics, engineering and computer science for the future.


What inspired you to choose the education/career field you did?

As a child, I was fascinated with the space program and wanted to be an astronaut. I was also very interested in science, especially astronomy and geology, and also the design and development of the space shuttle. In middle school, I researched the careers and career paths of many astronauts. At that point, I decided I wanted to be an engineer and someday work for NASA. I planned my high school and college courses to prepare for this career. However, as I got older, my dreams of a career with NASA faded, and I no longer thought they were realistic. I still thought I wanted to become an engineer. During engineering school, I found that I was more interested in the mathematics behind the engineering problems. For this reason, I pursued a degree in math with a strong concentration in engineering. My engineering coursework taught me problem-solving skills to make me successful in any scientific application. My current research at NASA applies my math education to astronomy and geology. 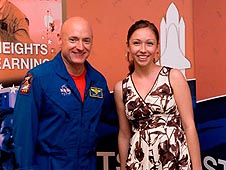 What do you think will be the most important things you'll take away from your involvement with NASA?

At NASA, I am involved in an interdisciplinary research environment that greatly differed from my educational experience. I participate in projects that require knowledge of multiple fields. I must understand my discipline so that I can explain my work to people of other disciplines and contribute to the team. Sometimes I view a problem differently than people in other disciplines. My unique perspective improves the quality of the final solution. I am able to help geologists and planetary scientists with my mathematical and engineering background.

My experience with NASA education programs has already greatly affected my future. It has given me the inspiration to pursue graduate school and ultimately a career with NASA.

I hope to continue my current research or other similar space-related research. I would like to get a full-time position with NASA.

Choose a STEM (science, technology, engineering and mathematics) career field and be very dedicated to it. Study hard and be independent as much as possible. You may have to teach yourself something new to be successful. Always look for new things to learn. Be willing to learn about other disciplines. Have patience and be persistent when pursuing opportunities with NASA. Sometimes pursuing a career with NASA involves some risk. Be willing to take the risk, and don't just take the easy route. Take advantage of research opportunities and always be looking for ways to be part of NASA programs.

I will represent the success of the NASA education programs and hopefully help inspire the next generation to get excited about a career at NASA.