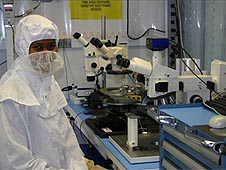 I have had the privilege of experiencing several NASA student opportunities. Each one has had an important impact on me as a person and as a student. During the summer of 1999, I worked as a high school intern at NASA's Kennedy Space Center in Florida. This experience helped me decide that I definitely wanted to major in aerospace engineering. I worked in the Logistics branch of the International Space Station, and I learned how all the parts of the ISS come together to complete such a colossal project. I also witnessed the launch of the first female commander of a shuttle mission as Eileen Collins led her crew to deploy the Chandra X-Ray telescope.

Between 2003 and 2006, I was part of a NASA-related research project at my university, the Massachusetts Institute of Technology. The project, called SPHERES, builds a test bed for testing algorithms to control satellites flying in formation. The SPHERES test bed has ultimately been operated inside the International Space Station. Through SPHERES, I learned about the rigors of working with space hardware.

In 2004, I was a summer intern at NASA's Goddard Space Flight Center in Greenbelt, Md., through the NASA Academy. The Academy is a specialized internship that trains the future leaders of the space program. Through the academy, I gained a broad understanding of the space industry through site visits, lectures and tours of space facilities. I also learned new aspects of physics through my research project in the Laboratory for High Energy Astrophysics at Goddard. My experience in the NASA Academy helped me decide that I wanted to continue my studies in graduate school.

Through the NASA Academy, I learned about the NASA Institute for Advanced Concepts. I applied to their Student Fellowship Program, and I was selected to attend the 2004 NIAC conference and present my ideas about the use of space-based solar power to meet needs in developing countries. Through my experience with NIAC, I decided that I wanted to continue to study the use of space technology for developing countries.

Also through the NASA Academy, I learned about the Jenkins Pre-doctoral Fellowship Project. This NASA project provides tuition assistance and a living stipend for graduate students from communities that are underrepresented in NASA-related fields. I also appreciate that the fellowship brings students together for an annual convention to meet with representatives from NASA and academia. The Jenkins fellowship supported me during my first two years of graduate study at MIT.

In 2009, I am representing NASA through the NASA Student Ambassadors Virtual Community at the International Astronautical Congress in Korea. NASA also sent me to the IAC in 2008 in Glasgow, Scotland. At both conferences, I presented results from my research on the use of satellite-based technology in developing countries. This conference is a valuable research opportunity for me because the community that works in this field comes together at the IAC. Thus, NASA's support allows me to make valuable research partnerships with organizations such as the United Nations. 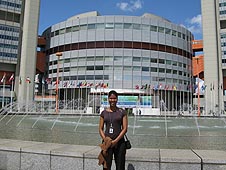 In what other space-related student opportunities did you participate?

NASA supported my participation in the International Astronautical Congress. Through this opportunity, I connected with members of the United Nations Office of Outer Space Affairs, which is based in Vienna, Austria. Because the work of this office is closely aligned with my research interest, I worked as an intern with the U.N. in Vienna during July and August of 2009.

This United Nations office has three main functions. First, it supports the Committee on the Peaceful Uses of Outer Space, which is the primary U.N. body that deals with international issues in space technology and law. Second, the office has an initiative called SPIDER (Space-based Information for Disaster Management and Emergency Response) that facilitates the use of space-based technology to respond to disasters. Third, the office runs a Program on Space Applications, and this is where I contributed. The PSA promotes the use of satellite-based technology for the benefit of developing countries. In particular, satellite remote sensing, communication and navigation provide practical and affordable infrastructure to meet needs in developing countries. The work of the PSA is related to NASA because many developing countries collaborate with NASA to use satellite data for environmental monitoring, natural resource management, disaster response and famine early-warning systems.

My work with the United Nations contributed to a new effort of the Program on Space Applications -- the Basic Space Technology Initiative. I collaborated with U.N. colleagues to consider how this initiative could help developing countries that are in the process of developing local satellite expertise.


Explain the research you conducted through your NASA involvement and why this topic is important.

I am currently a doctoral student at the Engineering Systems Division of the Massachusetts Institute of Technology. Thanks, in part, to the funding from the Jenkins Pre-doctoral Fellowship Project, I was able to design my own project for my graduate research at MIT.

My work provides in-depth analysis about the satellite activities of African countries, creates a metric to evaluate national space activity at the global level, and studies the dynamics of international collaborations on satellite projects. This is important because there is very little systematic research that can support policy makers at the national and international level who want to use satellite technology for development.

My research is exciting because it is an opportunity to combine two distinct passions of mine -- aerospace engineering and international development. 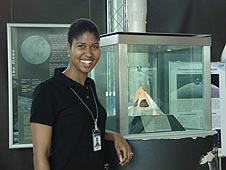 What inspired you to choose the education/career field you did?

An important part of my inspiration was all of my experiences with NASA. At Kennedy Space Center at age 17, I was able to see ISS modules in the clean room and the space shuttle orbiter in its processing facility. I knew that space was a field full of challenge, mystery and excitement; I wanted to be a part of that. Meanwhile, I was also being inspired by world travel experiences. During college breaks, I worked as a volunteer in Kenya. I lived at a school for girls who came from the slums of Nairobi. I tutored them in math, English and science. In addition to my love of the space program, I wanted to do work that would improve the lives of people in Africa. Thus, my current research work on the use of satellite-based technology in developing countries is a way for me to combine my interest in aerospace engineering and international development.


What do you think will be the most important things you'll take away from your involvement with NASA?

I appreciate the sense of community at NASA. In each of my NASA experiences, the students and mentors have shown a strong connection to their work and to each other.

I hope to remain connected to the NASA community in the future, no matter where my career takes me. I want to share in the drama of our national space program as well as contribute to the team that makes it possible.

My ultimate career goal is to use my training in both aerospace engineering and international development to further the opportunities for developing regions to benefit from satellite technology.

My advice to other students is to take initiative with their careers and seek advice from those around them. It can be daunting to learn how to get involved with NASA because the organization is so large. Students can start by asking professors, advisors and other students about NASA opportunities. They can follow the Web sites from NASA education offices and state Space Grants. They should not be afraid to call or e-mail someone they do not know who may be able to help them.

As a NASA Student Ambassador, I hope to communicate to people both inside and outside of the space community about the practical ways that space technology meets needs in our society.