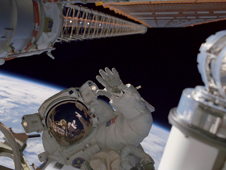 What Is a Spacewalk?

Anytime an astronaut gets out of a space vehicle, it is called an extravehicular activity, or EVA. This is also called a spacewalk.

Today, spacewalks are done outside the International Space Station. Spacewalks usually last between five and eight hours, depending on the job.

The world record for the most spacewalks is held by Russian astronaut Anatoly Solovyev, with a total of 16 EVAs and more than 82 hours outside in space. NASA astronaut Michael López-Alegría holds the U.S. record with 10 spacewalks totaling more than 67 hours. 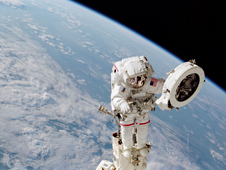 Why Do Astronauts Go on Spacewalks?

Astronauts also can test new equipment and make repairs to satellites or to their spacecraft while in orbit. By going on spacewalks, astronauts can repair equipment that might otherwise have to be brought back to Earth for repair.

How Do Astronauts Go on Spacewalks?

When astronauts go on spacewalks, they wear spacesuits. Spacesuits protect spacewalkers from the harsh environment of space. They protect astronauts from extreme hot and cold temperatures, harmful space dust and radiation. Spacesuits also give astronauts oxygen to breathe and water to drink during spacewalks. 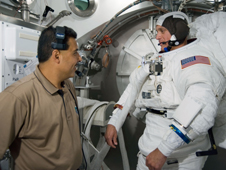 Once in their suits, astronauts breathe 100 percent oxygen for several hours until all the nitrogen is out of their bodies. Nitrogen in the body during a spacewalk can cause gas bubbles to form in the body. These gas bubbles can cause astronauts to feel pain in their joints, such as their shoulders, elbows, wrists and knees. This condition is called "the bends" because it affects the places where the body bends. The same condition can affect divers who use oxygen tanks to breathe underwater.

Astronauts use handrails on the space station to help them move from place to place. Sometimes a large robotic arm is used to move astronauts on spacewalks. Astronauts are attached to the robotic arm using a foot restraint. 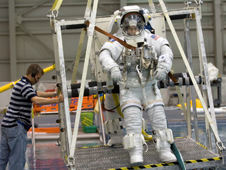 Astronaut Michael E. López-Alegría is about to be submerged in the waters of the NBL near Johnson Space Center. Image Credit: NASA
›  View Larger Image

How Do Astronauts Stay Safe During Spacewalks?

Another way astronauts stay safe during spacewalks is by wearing a SAFER. SAFER stands for Simplified Aid for EVA Rescue. SAFER is worn like a backpack. It uses small jet thrusters to let an astronaut move around in space. If an astronaut were to become untethered and float away, SAFER would help him or her fly back to the spacecraft. Astronauts control SAFER with a small joystick.

How Do Astronauts Train for Spacewalks? 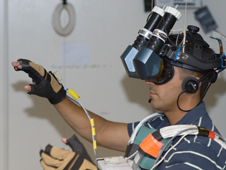 One way astronauts train for spacewalks is by going for a swim. Floating in space is a lot like floating in water. Astronauts practice spacewalks underwater in a large swimming pool near NASA's Johnson Space Center in Houston, Texas.

The pool is called the Neutral Buoyancy Laboratory, or NBL. It holds 6.2 million gallons of water. For every one hour that astronauts will spend spacewalking, they must train for seven hours in the NBL.


Original Article: http://www.nasa.gov/audience/forstudents/5-8/features/what-is-a-spacewalk-58.html
› Back To Top